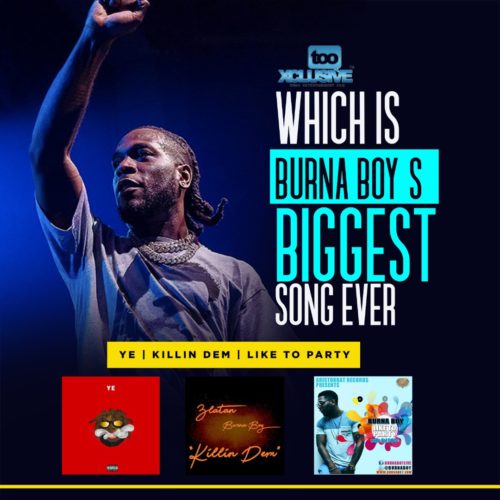 Burna Boy is approaching a decade in the Nigerian music industry already and throughout the journey that is leading him to that milestone, he has released so many awesome tracks to keep fans dancing on the dance floor and inspire them as well when need be.

If anyone is giving the task of choosing one Burna Song that happens to be his best, then it would be agreed that the person for long hours might be in the midst of confusion and stagnancy. That’s exactly what happened to us when we tried to pick the best Burna Boy song of all-time until we settled with a decision to narrow them down to three. The three songs have been listed below and we would love you all to choose which is Burna Boy’s biggest ever song.

Nifemi is a graduate of the University of Lagos. He's a unique user of the pen when it comes to the expression of whatever. He is editor-in-chief of the organization and also a writer of news, articles, editorials and a lot more to help expand the level of knowledge of the readers and simultaneously have them entertained. A lover of music and football is who he is and a Man Utd die-hard.
Submit your comment
4 total comments on this postSubmit yours
Popular Posts