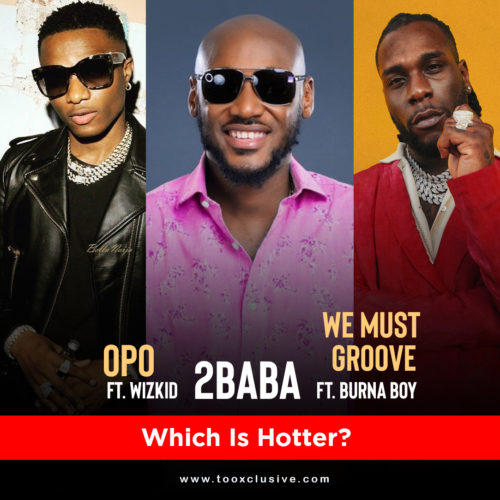 Nigerian Award-winning legendary singer-songwriter, Innocent Ujah Idibia, popularly known by his stage name 2Baba kicked off his highly anticipated body of work “Warrior” on 28th of February 2020, which enlisted an array of the top Nigerian A – list artiste like; Olamide, Tiwa savage, Wizkid and Burna Boy. 2Face started celebrating 20 years of his excellence in the Nigerian music industry, which is not just 20 years of being in the industry, but also his 20 years of success. The project enclosed some hit and lot banging tracks which music fans can’t just get over, but our major focus on the ‘Warrior’ album with this article will be on two tracks. “Opo” ft. Wizkid and “We Must Groove” ft. Burna Boy.

The Music Icon and Starboy joined forces to dished out this impressive tune “Opo” which got a production credit from Blaq Jerzee. “Opo” means plenty, the legendary singers talked about an Endowed lady. The song is a feel-good jam with a lovely vibe, melody and catchy lyrics.

“We Must Groove” is also a track that will make the album always be on repeat on your playlist. 2Baba employs the service of the African Giant – Burna Boy on this track as they both bless us with some catchy lyrics and vibes. The Afrobeat/afro-fusion tune which was engineered by Jay Sleek is a conscious music that talks about reality, the fact that we all have to continue moving forward in life no matter the pressure we get. Apart from been a conscious song, it’s also a groovy one to ease your mind, the tension around as you keep fighting to move ahead.

These tracks; “Opo” and “We Must Groove” have been doing massively great off the album and receiving much love from music fans in terms of streaming and also topping all music charts. There is currently a debate in the music industry as to which track is the hottest among the two.

Most feel Wizkid made the greatest impact/feature on 2Baba’s ‘Warrior’ album with “Opo” while some are like Burna Boy killed the album with his contribution on “We Must Groove”. The debate as to who had the album locked down has made us to hand the finally decision over y’all the viewers… Between “Opo” ft. Wizkid and “We Must Groove” featuring Burna Boy which is Hotter on 2Baba’s new album ‘Warrior’