3 Nigerian Artistes That Have Celebrated African Women Through Their Songs 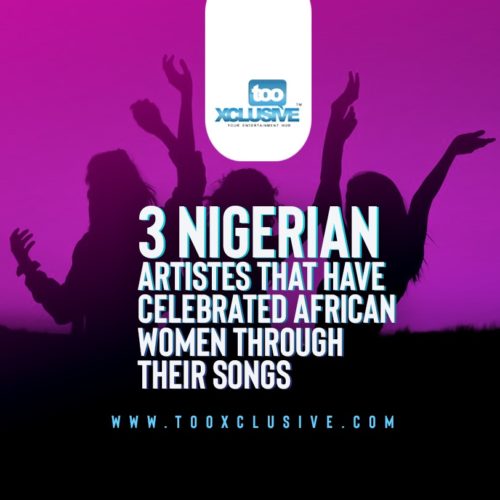 For decades, women have been tagged the ’’ weaker sex’’ due to the belief that originated from the ancient days which says women should be treated as ‘slaves’. This belief which has been in practice since the 20th century is yet to be put to an end as this present generation have one way or the other accepted it.

Majority of African men still believe that women who go through western education can never make a wife material as their job is to be in the kitchen and do house chores.

However, with recent development in gender equality, women have stood up for themselves to fight and try to eradicate such notion that women are solely meant for procreation and nothing more. Women that have fought for this are either tagged as “career women or Feminists”  Therefore, we have seen it as an importance to appreciate men who recognized the importance of women through their music and that’s why we have brainstormed to bring forth a list which gives details of Nigerian artistes who are enlightened and have different perspectives about women. These artistes have released songs that not only celebrate the African woman but also encourage them and their crafts.

In this song, Davido showcases different empowered women who inspire greatness in the society. These women excel in their endeavors and also never relent from being virtuous and industrious women. These women include, Uche Pedro, the founder of Bella Naija, Adetutu, a model who has faced so many backlashes publicly simply for having tribal marks on her face and also his girlfriend; Chioma who is proposing a classy African & continental restaurant to be set up in the city of Lagos, and many other prominent women. Davido used the medium to praise and encourage all African women calling each of them a ” wonder woman” which brings about the title of the song.

Tekno totally adores all women in this song, he started by having different women drawn on his wall by himself, talked about their braveness and what they can offer to the society. Tekno made it known that a woman’s life does not end in the kitchen as they can be equally recognized in the society. He also propagated that women should be trusted with key decisions as they are very equal to the men.

Ida sings about how beautiful and sexy African women are regardless of their tribe and lack of uniformity in their language. In the visual to the song, he shows photos of different women representing their culture and ethics. Ida encourages the natural skin beauty of all African women. He gave all African women the confidence of believing in their natural beauty. In the song ida would do anything to have an African woman by his side as he said they don’t just give you love but also encourages and support their men.