7 Nigerian EPs You Should Listen To This Week 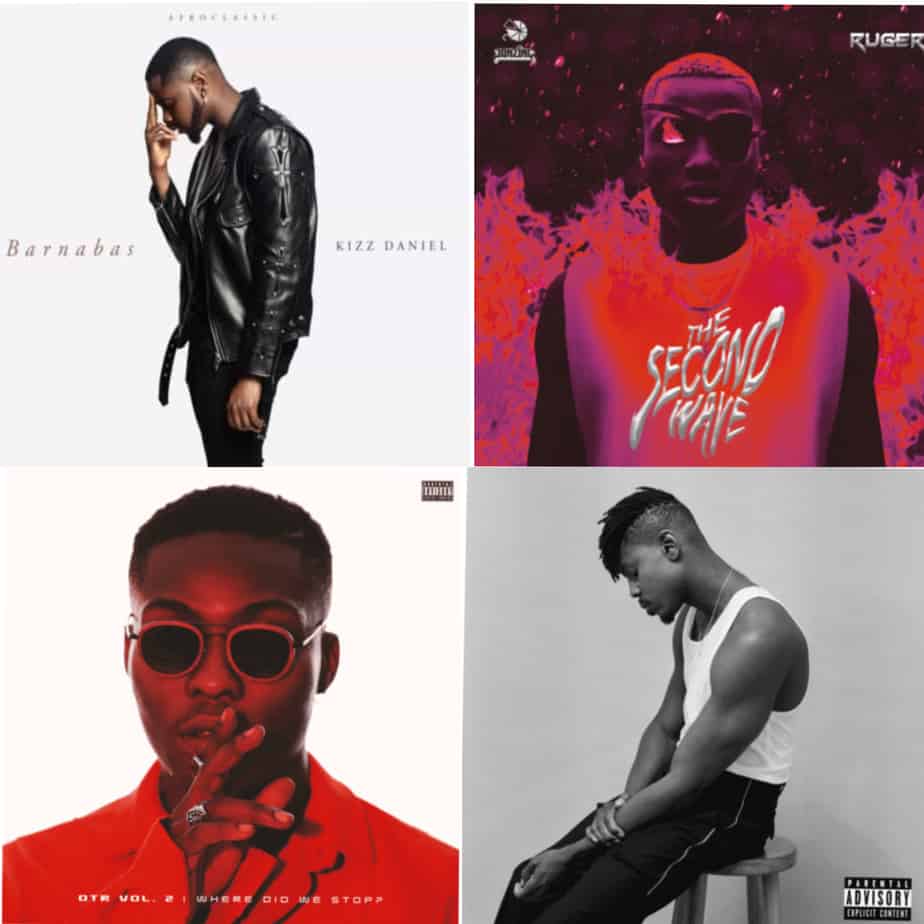 Hi guys, TooXclusive has something new and exciting for y’all this 3rd week of December, 2021.

We have carefully crafted out 7 (Seven) 2021 EPs to get you through the hustle and bustle of the new week. These mini music projects are the best in the industry right now, enrich with Motivation to push harder, vibes and melody to cheer you up, and fast/ dance tune to break boredom and send dull moments parking.

USAGE; You can listen to one per-day, or consume all 7 daily for the rest of the week…

“Barnabas“ is Kizz Daniel’s first ever EP, It consist of 7 tracks and features two guest artists; Highlife band- The Cavemen and Kelvyn Colt.

This body of work is an experimental, genre-bending collection of songs of encouragement. Houses hit tracks; ‘Pour Me Water’, ‘Eh God’, ‘Lie’, ‘Addict’ and more.

Sorry I’m Late EP opens with “Daniel Benson” (produced by Timi Jay), a track that sees Buju singing about himself in full melody and rhyming with his real names. Next, “Never Stopped” also produced by Timi Jay is all about the singer saying he got more to deliver as there is still much to achieve, and revealing his music components (You’re looking at a mix of Burna Boy and 2Baba, With a sprinkle of Khalid and Frank Ocean). Buju increased the tempo of his project on the third track “Kilometer“, produced by Rexxie.

“Something Sweet” takes him back to his mid-tempo vibe. The next “Ogechukwu” which features The Cavemen brings Highlife into the Afro-fusion EP. “For Here” is Buju singing just to his lady/ Madam Juliet, and the last “I Do“, produced by Steph is a mild track which the singer use to state that he would achieve whatever he has his mind on and build a legacy.

Ruger’s six-track debut EP Pandemic announced his arrival on the blossoming Afropop scene—and led him to opening for Burna Boy’s 2021 UK tour. He returned with his sophomore EP titled “The Second Wave” EP on the 26th of November, 2021.

On The Second Wave, Ruger reasserts his hitmaking credentials. His ongoing partnership with veteran producer KukBeat is once again on full display here, sticking with the formula that delivered “Bounce”. On “Champion”, he recalls his humble beginnings as the son of a roadside food vendor and recounts a steady growth from the streets to the stage—with plenty of chest-thumping: “Tell me why you vexing/not yet started, I’m still testing/already impressing.” He makes a call romantic attention on “Snapchat”, a fitting title for a star who first got the attention of label boss D’Prince by way of Instagram freestyles. The EP’s highlight and twilight is “Dior”, where the infectious percussive underlay becomes a neat canvas for Ruger’s distinct wordplay and self-assuredness.

After the release of Off The Record EP in November, 2020, Reekado Banks serves up the second instalment in November 2021, Hot on the heels of the Amapiano-infused single ‘Ozumba Mbadiwe‘.

Opener “Pulling Up” establishes the mood with its mellow grooves cocooning Banks’ balmy melodies. Applying an enlivened touch to Afrobeats rhythms, the singer shows off his tongue-in-cheek lyricism and sensuality on “Lupita Nyongo” and “Selection”.

The carefully curated 6-track project captures moments of growth, introspectiveness, love and life, beginning with the reflective LOTR II, an abbreviation of his nickname ‘Leader of the Revival’. On the project, Ladipoe worked with signature producer Andre Vibez (Ayra Starr, Omah Lay) contributing to the pioneering Nigerian Afro-fusion sound on ‘Running’ featuring Fireboy DML. Further exploring elements of his sonic palette, Poe provides fiery anthem ‘Afro Jigga’ with a guest appearance from Rema before joining forces with the future of Afro-pop Amaarae for heavenly ‘Love Essential’.

Revelling in divine guidance, LADIPOE embraces his destiny on this project. Listen and Enjoy below

While rooted in Afrobeats, singer-songwriter Seyi Vibez folds elements of hip-hop and indigenous African rhythms into his vibrant sound. Informed by his own experiences and inspired by life on the streets of Ikorodu, he injects gripping messages throughout his debut EP NSNV (“No Seyi, No Vibez”). Alongside breakout hit “God Sent“, he relays his hopes and dreams on songs like “Catalyst” and “Big Vibe”—positioning himself as the everyman of Nigerian Afropop. Enjoy!!!

Born Akinbiyi Abiola Ahmed, Bella Shmurda has become one of Nigeria’s most formidable vocalists. After rising to prominence back in 2019 following the release of “Vision 2020”, a single which chronicled his time spent hustling on the streets of Lagos, the singer embarked on a peerless singles run which culminated in the release of his first EP, 2020’s High Tension. Now, on the other side of a Headies Next Rated Award, the street poet continues to speak through music with a conscious message. “High Tension 2.0 is another dimension of Bella Shmurda,” he shares. “A new style, a new vibe, a new thing for my people. It’s like lightning. You can’t stop lightning from striking, and that’s the way I’m coming. I’m coming to penetrate. I’m coming to cheer up my people. I’m coming to change people’s minds, consciously.”

This E.P sees the young songster push himself into an experimental world, determined to deliver a classic and rightly so. With this project, Bella makes an extended reach for the frontlines of the New Guards of Afrobeat Music. Listen below

Tags: Songs To Listen To This Week
Share160Tweet100Share40
Previous Post