9 Most Viewed Nigerian Music Video In 2019 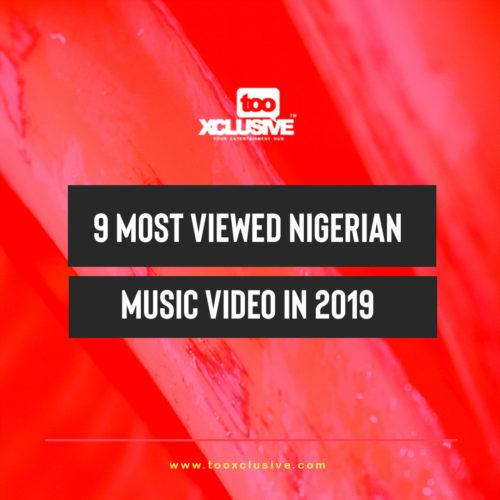 2019 was an unforgettable year in the Nigerian Music Industry, seeing some of the Nigerian artists with good potentials and quality materials made it to the limelight and some others making it big financially and also bagging some awards and a countless number of streams due to their commercial success.

After reviewing all the quality performances and commercial success of our Nigerian artiste in the year 2019, We decided give our audience an insight of top music videos with this article that contains the most viewed and streamed classic Nigerian music videos of 2019.

Below is a list of 9 most viewed Nigerian music videos in 2019, (Ranked from the highest view to the lowest)

First on the list is one half of the defunct music duo, Rudeboy’s hit single “Reason With Me”. which undoubtedly was one of the biggest records to be released in the year 2019 as produced by LordSky. The record did massively well in the country and outside it. The audio also got a lot of streams and downloads on every music platform. Rudeboy premiered the music video for ‘Reason With Me’ on the 15th of April 2019, just like the definition, video is the revelation of the hidden treasure in the audio, Rudeboy did justice to the visuals of the hit track. The video has a very narrative story that everyone could easily attribute to their personal experiences or the reality of society. It explains more about Rudeboy’s love interest in a particular lady who he wants to manage his status and reason more with him, see things in his direction and follow him on his journey to success. KingRudy had to act like a local poor man. The lady didn’t reason with him, left him with his poor status and moved forward with her.

On the long run Rudeboy eventually made it, became successful and built his own company. On seeing that he has made it, the lady who left him when he had nothing, reached out to him and wants Rudeboy to take her back.

The song carries a very strong message which is experienced in all relationships among humans guess thats why it gained over 44million views on Youtube.

OBO comes to seat on the second position of this amazing compiled list of the most viewed music video in the year 2019 with the hit song  “Blow My Mind” which was said to be the most played Nigerian song in the US. He teamed up with American superstar, Chris Brown on the hit track. The visual smashed all Afrobeats records on YouTube at all levels, reached over 30 million YouTube views in just three months. This made an African record! Currently it has over 39million YouTube views since premiered on Jul 30, 2019.

As we all know that this list is incomplete if the Starboy is nowhere to be found. “Joro” comes in as the third position on this list. After a long wait from the fans for a 2019 song, Wizkid finally blessed them with this record on the 30th of September. A song which was said to be the most search Nigerian song in the year 2019 alongside Burna Boy’s “Dangote” and Beyonce’s “Brown Skin Girl” occupying second and third spot respectively.

The song was criticized when it was released but on the long run it tends to be fans favourite. Currently, the visuals has earned over 26million Youtube Views.

The 2020 Grammy Nominee can’t be left out on this list also. He grabs the fourth position with his smashing hit track “Killin Dem” where he employs the service of the Zanku Master, Zlatan on the project.

“Killin Dem” was the last single Burna Boy dropped late 2018. The song which features the new rave of the moment, Zlatan buzzed all speakers during the festive period and it also trended into 2019. As it is still in the hearts and ears of everyone Burna Boy released the video on the 25th of January 2019.

The video sees Burna Boy showing off his Zanku skills alongside Zlatan and dancer Poko Lee. This inspired fans to bumped the youtube page to take a sneak look at what the singer got for them and to also learn some Zanku skills and steps which makes it gathered a lot of views. It has over 24million Youtube views presently.

Boy Kizz or Vado is the number 5 of the list of the artiste with most viewed music video in 2019 coming in with his hit track, “Madu” which was the talk of the music industry during the first half of 2019 due to its catchy words and sexual lines. After weeks of teasing, Kizz Daniel finally debuts the hotly anticipated music video for “Madu” on Feb 8, 2019, and was an instant catch.

Ex BBA housemate, Beverly Osu, captivates us with her enthralling sultry dancing and Kizz also gives nice dance moves with his guys. Beverly plays the “dominant” in the video which is quite the irony of what the song says.”Come to my bedroom, cassava dey for you”. You can see that Beverly is the one in control when she grabs him close to her and pushes him to the wall.

Another one coming from the African Giant again is his other hit song “Anybody” which made the sixth position on the most viewed music videos in the year 2019. Burna boy dropped Anybody sometimes in ‘June’ and the song instantly became the new jam on the streets and on air. The song went ahead to become an anthem on the streets of Nigeria, but not only booming in the country,  it is also doing well internationally reviving the Fela sound, as Burna boy definitely did Afrobeats at its best.

Aside from the dope production on the instrumental, the song also has good lyrical content and catchy lyrics like ‘Knack am something eee’… The Visuals really found a strong audience with more than 20million YouTube views till date since released on Jun 14, 2019.

Oluwaburna the DonGongon charges up his energy on these Rock-star visuals that made everyone ‘Gbese’ and ‘Gbe Body’. It was directed by Clarence Peter (Capital Hills) if you missed out on this you can still catch it below

Wizkid stands out high again with his catchy tune tagged “Low” owned by Music influencer, Larry Gaaga. The track which was Produced by BlaqJerzee and Mixed/Mastered by STG. Gaaga the cool best out of Starboy. Wizkid definitely got the vibes and melody flowing inside of him in the addictive jam.

The Official Music Video for “Low” directed by Moe Musa had Starboy Wizzy doing what he knows how to do best, Giving us Swag and play with beautiful ladies as he sings with his tuneful voice on the crispy visuals which made it acquired over 17million YouTube Views ever since released on Apr 19, 2019.

Just as we expected, OBO appears on the list again taking over the eight position with his global hit track “Risky”. Davido who Proves To Be The Commander-In-Chief Of Afropo as delivered on this Ingenious Record where he joined forces with the Jamaican Unruly man, Popcaan.

“Risky” was found sitting on top of Apple music of 8 different countries across the African continent and the Caribbean territories doing absolutely well on all digital music streaming platforms.

Davido and Popcaan made a movie out of the visual directed by JM Films which currently has over 16million YouTube Views since premiered on Oct 23, 2019.

The last but not the lease on the list of the most viewed Nigerian music video 2019 is no one but the one and only Divine Ikubor, popularly known as Rema who was introduced by Don Jazzy’s Mavin records and D’Prince’s Jonzing World. The next rated act got himself the ninth position with his smash hit banging track labeled “Dumebi”.

Rema rose to prominence early in the year 2019 and dished out one of the best Eps which had the hit track “Dumebi”. The track received massive airplay and won the AFRIMMA Video of the Year and also got massive audiences and streams.

The video tells the story of a typical teenager who has to go through the pain of seeing his “crush” with her boyfriend which I feel is something we can all relate to. On these visuals, Rema joins four friends on a camping trip, a group that includes a girl he’s in love with. Sadly for him, the group also includes her boyfriend. Rema tries his best to show her how he feels but is thwarted at every turn.

Dumebi video is one of the best visuals in 2019 directed and produced by Ademola Falomo which has hit over 15millions of views on Youtube ever since released on May 21, 2019.

Aside the above listed music video, we have a special recognition we bringing into this article. One Nigerian artiste, a young star that deserves accolades for bringing something different into the Nigerian music industry.

Our Notable Mention goes to Joeboy. The fast rising artiste and next big pop star brought the visualizer game into the industry and major part of music in 2019. He made everyone loved the visualizer thing because of the story line he infuses into his songs.

Poka studios made this possible for him. Joeboy visualizer gained millions of view more than some A,B list artistes music video. He didn’t make the above list because its a list for music videos for his visualizers can’t be over looked. Below are what the young act earned with his unique game, Check it out

The second hit, “Beginning” has over 16 Million YouTube views

And also third, “Don’t Call Me Back” has over 9.5 Million YouTube views

We look forward to more records from our artistes this new year 2020.