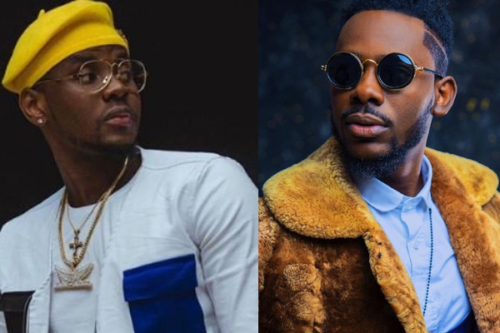 Sensational singer, Adekunle Gold has revealed how he and Kizz Daniel came up with their latest hit “Jore”

The stars had fans on their toes when they hinted that they have a collaboration in the works. Little did we know that the track was ready and only needed to be released. It would not be the first time two male singers would have a collab in the industry but a Adekunle Gold and Kizz Daniel collab was a first for fans.

In a recent interview, the “Don’t Wake Me up” crooner described his experience working on their latest single “Jore”. According to him, the “Madu” singer actually inspired Jore. Adekunle Gold disclosed that he was at Kizz daniel’s show in December and they decided right there that they had to work on a collaboration. Tne singers hit the studio and “Jore” was born. He said, “Kizz Daniel actually inspired Jore. I was at his amazing show in December and we decided right there that we had to work on a collaboration.”

When questioned about how he was able to change his sound, the former YBNL signee explained that his genre would change but his sound has not changed. He said, “My sound has not quite changed. You can hear me on any song. No matter how sonically different it is, you would still recognise my voice. The genres could change but I would always be me.”

“Adekunle Gold Reveals How Kizz Daniel Inspired Him To Create Their Latest Single “Jore””, 5 out of 5 based on 4 ratings.