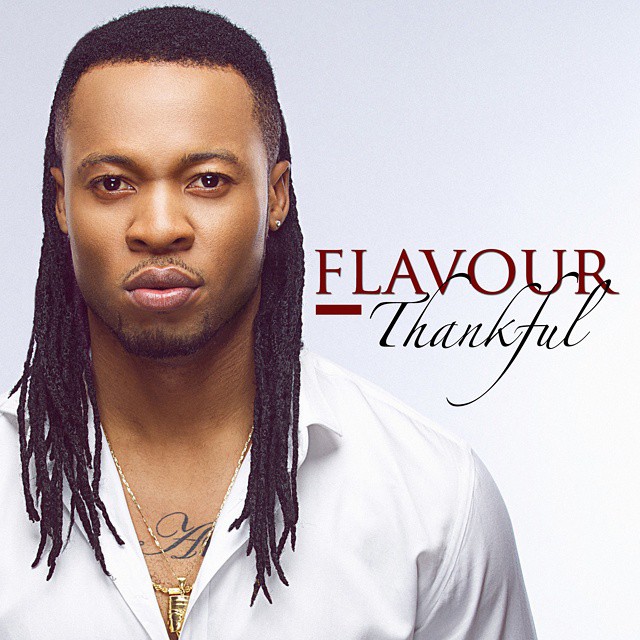 Flavour continues his winning streak as Naija’s high life prince. His career rise album after album, have been a steady advancement from the glory of the former to the latter. Every past not only defines who he is but also reveals who he’s going to be. Strings of events by reason of luck or happenstance have led to him being Uplifted, Blessed and now Thankful. So what could have possibly gone wrong when he chose to put out a 21-track studio album with no hype or promotion of any sort prior to it’s release? Not-a-darn-thang! Be it truth or fable about selling a million copies in 5 or so days, Flavour arguably will max out sales in record time because he’s successfully built a rep that weighs across local and international borders and isn’t even gender specific. Perhaps this is majorly one of the many reasons why he believes timeis appropriate to be thankful.

Keneya starts off the LP sounding like a church gospel song that admonishes us to thank God for everything. Ololufe, a lovers’ duet has Flavour professing love for the beautiful one he wants to marry and thankfully, she’s saying yes! This would have been perfect to kick off the LP experience especially with assisted vocals from the petite and power-vocaled songstress, Chidinma whose penchant lies in seasoning her embellishments with pitches here and there. They nailed it! Dance continues with an even graduated pace. Flavour is mesmerized by the dance artistry of a certain ‘baby’. Orinado is sampled on a slower, perhaps smoother tempo unlike Dance. This slang is used to describe the chic who’s giving him the vibes he likes as he performs. So he begins to praise her for making him feel good.

Wake Up becomes the new ‘DON’T DULL!’ fashion. Built on an inducing tempo with groovy makossa beats, Wande Coal dealt admirable bits of vocal effort by owning the song totally off Flavour whose ad-libs and licks came quite timed and with plenty tang to spice up the joint. Golibe tones down the previous hype with it’s afro R&B styling. It means ‘to enjoy’ and Flavour stays sprung on the beauty of a girl he describes as a replica of her mother. Thus, she deserves to enjoy because she’s beautiful. Wiser features indigenous rap heavyweight, Phyno as well as self-acclaimed best rapper alive, M.I. It’s is an applaudable blend of the afro and contemporary hip-hop genres. Flavour sings to not be blinded by love, you can fall in love but you gotta do it with brain. Phyno and M.I agree with complementing lines. Nwayo Nwayo stresses on the need for everyone to take life simple as it is. No need to rush.

The first of the LP’s Skit is a pub banter where Flavour’s perv clique express their dismay on modern day girls of a particular young age bracket and how they’ve become so maturely endowed. It is also twined with some doltish humour. Sexy Rosey employs some raunchy expressions in praising Rosey for her physical attributes. Flavour goes on about how he’ll do anything for her just because she’s sexy. Paying tribute to women from a sect of Eastern Nigeria, Imo State, Nwanyi Mbaise is a myth suggesting that they are fine women who use their ‘bottom power’ to enchant their men. Perhaps he got caught up in the web of one. Special One is delivered on reggae instrumentals. Flavour finds the woman of his preference and pledges his vows, convincing her that she’s the one. Beautiful stuff!

Putting the LP back on the Thankful subject, Ife Adigomma – a song of thanksgiving, carries a deep message on the urgency to live in the now. There’s a tricky twist tied to it when Flavour deviates by asking a girl to ‘give it to him and then chop his money’. Unlike the other tracks that are about a female’s body part, the Selebobo-produced Mmege (slang for girl), showers accolades for being different in beauty, character and general make-up. Selebobo even showed better vocal finesse than Flavour. He is joined again by his perv pack for another Skit. Oloye, Jerry Cee and Whad Up make more pub banter about girls and their natural endowments. At this point even you can agree that it’s an issue already overflogged thereby losing it’s humour appeal.

Uru Dia (Shake 2) is a remix to the popular Shake. This time, Flavour sings that her behind is worth it… the way she moves it makes him want to lose it. Masterkraft’s production on the remix is not as exciting as the Del’B original. Should have been totally avoided. He attempts at penetrating a new fan base with Inasonki, a Northerner’s way of vocally expressing his emotions. You’ll be forgiven if you press skip on this one. Believe preaches solidarity and unity. A clarion call for us people to be as one. The track hardly inspires patriotism or maybe it will, to just the Igbo folk alone. Munachi is the last of thanksgiving songs on the LP that accredits his source of success to God. The beat allows for some controlled rhythm stepping. Flavour pay respect to the Igbo folk with Igbo Amaka, a tribute that dotes much on all (good) things they’re known for and the places you can find them. It’s an abysmal wonder how Pick Up The Phone became the LP’s closer. Igbo Amaka was just perfect.

Undoubtedly, Flavour is talented but he stakes his esteem with little blips like titling and disarrangement. There’s obvious lack in his reasons for being thankful as opposed to his appreciation for them God-made ‘Eves’. Thankful loses it’s balance and composure with how genres were switched and tempos alternated nonchalantly. Clearly, he sought out to diversify by stepping out of his comfort zone to explore other genres as well as themed concepts and while it’s an effort that is worth commending, they were quelled by careless attention to technicalities. Masterkraft’s productions on the LP made for some of the best tracks as well as the awful too. But this doesn’t go without saying that he is one producer who brews out the finest stuff from Flavour. Having said, Thankful is a keeper with a fine selection of tracks that will grow on you as time passes. You’ll eventually get to appreciate it but just not yet, sadly!