American Singer;Tamar Braxton, Requests To Be On Davido’s Forthcoming Album

American singer; Tamar Braxton, has asked Nigerian Afrrobeats superstar; Davido for a chance to feature on the singer’s forthcoming album.

Davido’s international manager; Efe Ogbeni, shared a picture of Davido with his producer and management team in the studio as he reveals the singer is working “all week” in order to put his album together. Efe captioned the post; “Studio all week O @Davidoofficial album summer 2019, dropping #africa to the world”

On seeing the post, Tamar Braxton immediately crept into the comment section asking that Davido shouldn’t leave her out of his album. “Don’t leave me off that!! Thanks,” she wrote.

Should we be expecting Tamar on Davido’s album come summer 2019? 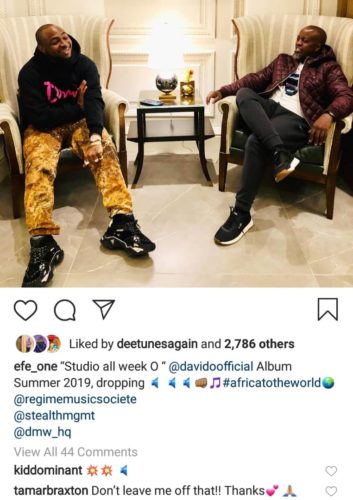