BBNaija: Angel Treats Cross To Breakfast After Giving Him Cold-Shoulder For Days 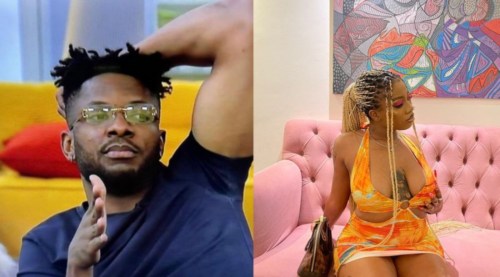 It looks like Angel has finally forgiven her fellow housemate, Cross as she treats him to breakfast this morning.

However, all is now forgiven, as the 21-year-old decided it was time for a change. She treated him to a nice plate of breakfast this morning. Cross, on the other hand, could not hold his surprise.

You will recall that Cross had previously begged Angel to reveal his offense to him but she refused and kept keeping her distance from him.

BBNaija: “Loving You Was My Biggest Crime” – Cross Begs Angel

“My Growth In The Industry Is Obvious…” – Terri

Nigerian singer, Waje has jumped in Saga's defense after he got criticized on her Instagram live for breaking down over...

BBNaija: Liquorose, Emmanuel And Cross Secure Spots In The Finale

"My Growth In The Industry Is Obvious..." - Terri