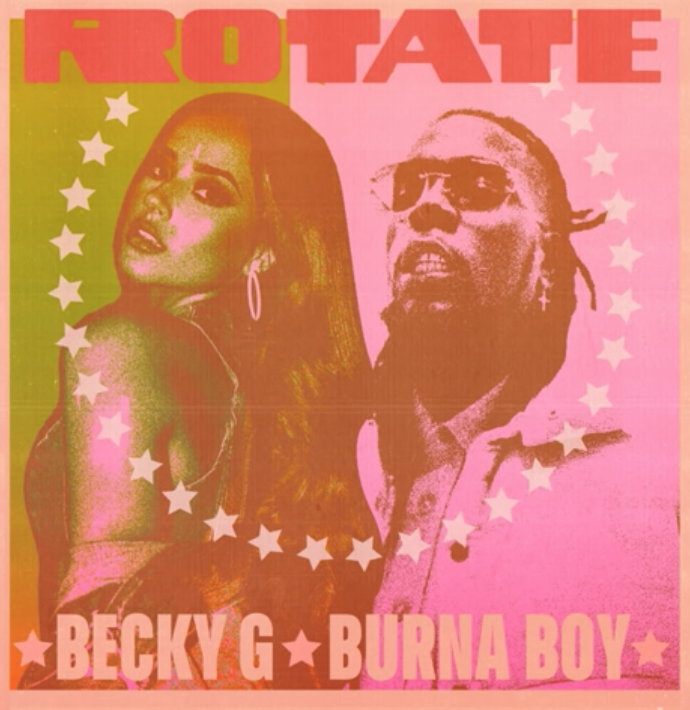 Becky G teamed up with Burna Boy and released “Rotate”.

Nigerian singer, Burna Boy connects with the world on this uptempo Dancehall and Caribbean Swagger song ‘Rotate‘ by American Singer Becky G. For him this another powerful 2021 international collaboration, A follow up to the recent collaboration with Sia, ‘Hey Boy‘.

Singer, songwriter and actress, Becky G was born for the spotlight and her multifaceted career is shaping up to be nothing short of iconic. The twenty-four years old star’s achievements include two number one hits on the Billboard Latin Airplay Charts (“Mayores” & “Sin Pijama”), starring roles in “Power Rangers” and “A.X.L.”, and guest-starring in Fox TV’s Emmy-winning “Empire” series. She recently won two 2018 Latin American Music Awards, for Favorite Female Artist and Favorite Urban Song (for “Mayores”) and was awarded YouTube’s Diamond Play Button for surpassing 10 million followers on the platform.

According to RollingStones – Rotate is tied to a new Pepsi soccer campaign, and as such the music and lyrics boast a triumphant energy. Burna Boy even tosses in a few references to the beautiful game in his verse, “Hmm this ain’t nothing abnormal/Should have known that I was a top scorer/UEFA Champions League baller/Win win win win I be oga”.

When asked about this song “Rotate’ to me is a celebration,” Becky G said in a statement. “I think it’s evident that football holds a special place in my heart and having Burna Boy join me on this made sense because ultimately I wanted to embody the perfect pre-game song that gets the blood flowing, makes you want to dance and enjoy the sport.”

Burna Boy added: “This is a song that inspires you to aspire and I’m truly honored to be a part of the Champions League journey. Writing it came from a place of positivity. The belief that no matter who or where you are, whatever your background or your origins are, there is no limit to what you can achieve when you put your mind to it! I believe we are all champions!”

GET On All Digital Stores