Between ‘Wizkid’, ‘Davido’, ‘Burna Boy’…. Who Made The Westerns To Love & Accept Our Sound?

Previous: Johnny Drille Issues Warning To Those Planning To Break Hearts With His Music On Valentine’s Day
By Tomiwa | Feb 13, 2020 | 13:37 - Leave A Comment 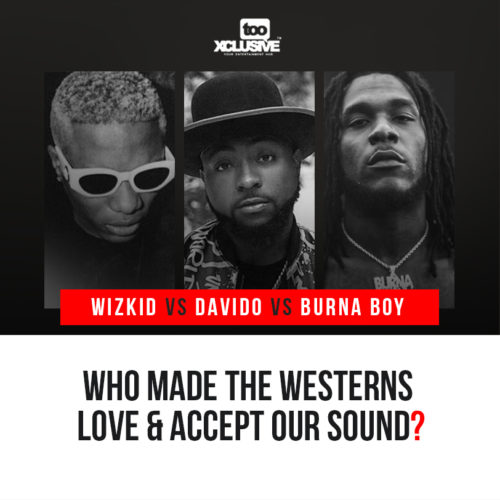 So yesterday the social media had Burna Boy’s hot sessions, First was Burna declaring himself as the Best since the departure of Afrobeat pioneer, Fela. And Second, as the artiste that brought Nigerians and Afrobeat the Respect we are currently enjoying.

These two statements didn’t really go well with some music fans on social media coupled with the fact that Burna Boy mentioned ‘Nobody Paved Way for him‘ & ‘Those that were there earlier made us look weak by begging and paying the Westerns to like us‘. Since then Social media has been on rampage with different fans bragging the African Giant.

This has made us come up with this post for music fans to tell and share their thought on who brought the respect we currently have today. Though the movement of our sound to the world started with the Real OGs, the 2face (2baba), D’banj and P-square but this article will be restricted to the new guys; Wizkid, Davido and Burna Boy.

We all know Wizkid made massive waves into the Western world with his debut album ‘Superstar‘. An album that is still on top demand till date. After Wizkid’s debut success his hit song ‘Ojuelegba‘ among others also had a lot of impact, bringing him in contact with Drake and from there he penetrated to the rest of the world.

Davido on the other also penetrated the Western world with his hit songs ‘Dami Duro‘, ‘Skelewu‘, ‘Tchelete‘, ‘Aiye‘ among others. In recent time he hit the Westerns hard with his 2017 globe hits ‘IF‘ and ‘Fall‘, that they couldn’t resist the Nigerian sound (We all know about this). Not to talk of his recents hit singles (‘Blow My Mind‘, ‘Risky‘) and album (A Good Time).

Lastly Burna Boy the main man (African Giant), self acclaimed BEST after Fela got the Westerns with his hit song ‘YE‘ a track off his ‘Outside‘ album. The song earned him a lot of awards and penetration. He followed the success up with his last album ‘African Giant‘ a body of work/project that took him to the highest level in the Western world. He got the highest recognition and respect, A Grammy Nomination, well not to say too much y’all know the rest.

Now to clear the air and be at a stand point, Within these three artiste; “Wizkid”, “Davido” and “Burna Boy”… Who Made The Westerns To Love And Accept Our Sound? Who Is The Chosen One? Who Got Us The Respect We Have In The World?

Drop your take and thoughts in the comment section below…