Previous: Davido Stretches Lead Over Other Nigerian Artistes On Instagram As He Reaches 13 Million Followers
By Taiwo Oluwafemi | Sep 30, 2019 | 06:14 - Leave A Comment 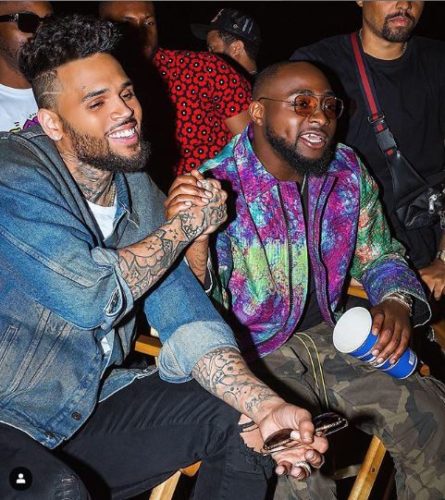 According to a Twitter user, the tracklist to Chris Brown’s forthcoming “Indigo Extended” album has leaked and yes, our dearest Davido is on it.

Y’all remember we brought you news last week about the proposed new album by Chris Brown just more than two months after her dropped his album “Indigo.” Well, it now seems like we would be getting the album sooner than we are expect as the track list to the album just leaked according to a Twitter user.

There are 11 tracks on what is being seen online and Davido has been featured on a particular track titled; “Lower Body.” Y’all also would remember Davido announced last week that there would be new music coming from him and Breezy this week but we aren’t sure if it would be this track or not as we believe they have several songs together 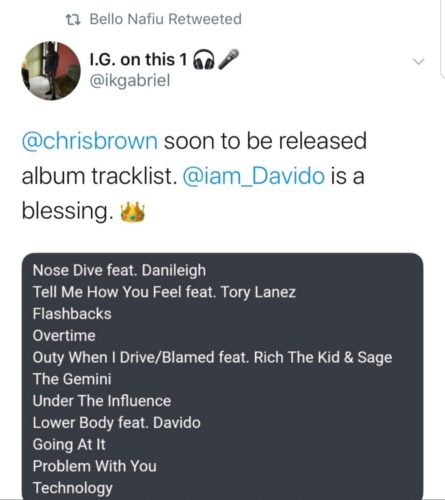 Nifemi is a graduate of the University of Lagos. He's a unique user of the pen when it comes to the expression of whatever. He is editor-in-chief of the organization and also a writer of news, articles, editorials and a lot more to help expand the level of knowledge of the readers and simultaneously have them entertained. A lover of music and football is who he is and a Man Utd die-hard.
Submit your comment
6 total pingbacks on this post
Learn More