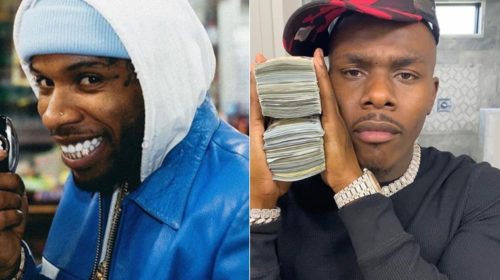 The ongoing bromance between DaBaby and Tory Lanez continues to wow their fans. The rapper further surprised everyone by bringing out Tory Lanez during his Rolling Loud set.

On Sunday night, Dababy shocked the crowd, by bringing out Tory Lanez during his set. DaBaby was the next artist to perform after Megan Thee Stallion. This happened in a twist, as Tory pulled up all masked up in a massive costume before he was revealed to the crowd.

After Lanez popped out of the costume, the two broke into a performance of their “SKAT” collaboration.

You will recall that Lanez collaboration with Baby on SKAT was the cause of the feud between DaBaby and his industry wife, Megan Thee Stallion.

Earlier this week, Lanez gave a shoutout to DaBaby during a freestyle, in which he also rapped about being framed in the alleged shooting of Megan.

Shoutout to DaBaby, Roddy Ricch, and Lil Baby/What I’m about to say is gonna sound a little crazy/But it’s true so don’t play me/Y’all all would’ve got your awards if they didn’t frame me, he rapped on Hot 97.