Davido & His Brother, ChairmanHKN, Fireback At T-boss For Calling Him Out Over Arrest Of Clout Chasing Girls

Previous: “This Instagram Police Wants To Have Sex With Me But She’s Ugly” – Naira Marley Clapsback At Police PRO, Opetodolapo
By Taiwo Oluwafemi | Nov 2, 2019 | 07:34 - Leave A Comment 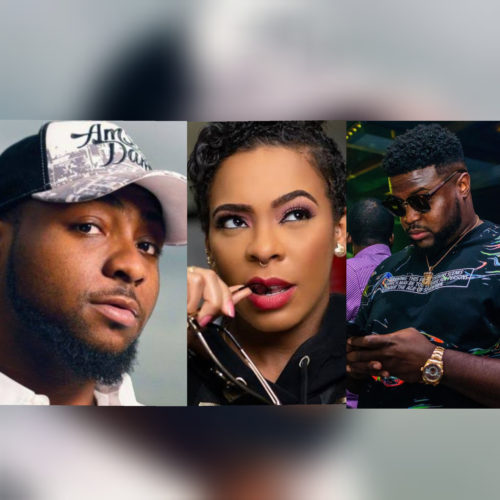 Davido and his brother; Adewale Adeleke, popularly known as ChairmanHKN have dragged ex-BBN housemate, T-boss for calling out the singer over his decision to arrest the girls that accused him of fake pregnancy on Instagram last week.

T-boss took to her Instaram yesterday to condemn Davido’s decision to arrest the girls saying he had not right to have arrested them or put them in hand-cuffs. Davido’s brother who seems really bothered by T-boss’ claim or her interference in the issue mildly blasted her, commenting on Instagram as to why she ought to have thought deeply before speaking.

He wrote; “It’s not for you to understand! Someone’s fiancee just gave birth and this is what they have to deal with! People must face the consequences of their actions, if it’s you now you will be crying up and down. Madam mind your business.”

That however wasn’t the only eye-catching comment as Davido also ridiculed T-boss calling her a low-budget version of famous fashion enthusiast and OAP, Toke Makinwa. He wrote; “Low budget Toke.”

#Davido and his brother, Adewale, react to #Tboss’ criticism

“Davido & His Brother, ChairmanHKN, Fireback At T-boss For Calling Him Out Over Arrest Of Clout Chasing Girls”, 4 out of 5 based on 17 ratings.

Nifemi is a graduate of the University of Lagos. He's a unique user of the pen when it comes to the expression of whatever. He is editor-in-chief of the organization and also a writer of news, articles, editorials and a lot more to help expand the level of knowledge of the readers and simultaneously have them entertained. A lover of music and football is who he is and a Man Utd die-hard.
Submit your comment
14 total pingbacks on this post