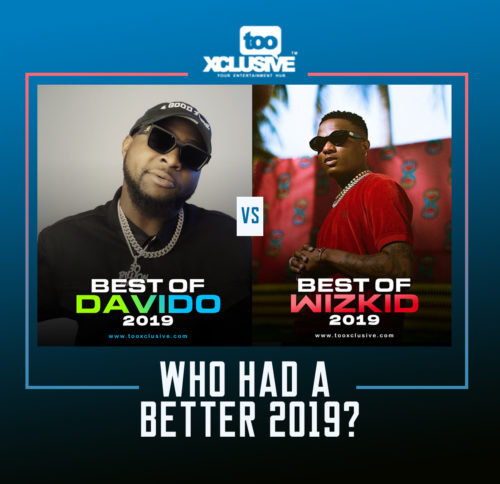 No doubt 2019 was a wonderful year and one that can’t be forgotten in the history of Nigeria’s music industry. Top A-list artistes had wonderful outing, we had newbies who shook the industry and also got hit songs with outstanding projects/albums that made it to the foreign lands. Burna Boy who had a wonderful outing in 2018 still stood firm at the top position in 2019 even earning more Awards, International recognition and penetration.

This post is for our main two biggest pop stars, Davido and Wizkid, We putting both artistes head to head to know who heard a better outing in 2019 and follow next to Burna Boy.

David Adedeji Adeleke familiar on stage as Davido  but often refered to as OBO, Is no dobut one of Nigeria’s biggest artist. Davido is not only known for his money but also for his hardwork and dedication towards his musical career. He started 2019 on a very good note by selling out the enomous 02 Arena on the 27 th of January and he was recorded as the first solo African artist to do so. Earlier in 2019 Davido was more on the International scene, recording, featuring and rolling with top celebrities. Also breaking records with his 2017 hit song ‘Fall’ in the US.

July 26, 2019 davido released the hit track “Blow My Mind” which featured Chris Brown an award winning international act, the song was produced by Shizzi.  The video amassed one million views in 11 hours, surpassing Wizkid’s “Fever” and “Come Closer” to become the Nigerian music video to achieve this feat most quickly. It also became the Nigerian music video to gain the most views within the first 24 hours of its release.

He followed it up with his second single “Risky” featuring Popcaan which became an instant Hit! Davido’s second studio album “A Good Time” was released on November 22, 2019. The album was accepted worldwide and it got quick Airplay.

2019 was indeed a good year for Davido not forgetting that he welcomed a baby boy with his fiancee Chioma.

Ayodeji Ibrahim Balogun, known professionally as Wizkid is a Nigerian singer and songwriter. Wizkid is definitely one of then greatest hit-maker in the industry. His consistency in the music industry has been so undisputed which is what has brought him this far today. The year was indeed a great one when Wizkid featured on Beyonce’s track titled “Brown Skin Girl” and having it as an anthem for every black woman.

Starboy dropped his 2019 first single ‘Ghetto Love’ early September, leaving his fans to chew on that after they have been starved for 7 months. Wizkid then followed up with the release of ‘Joro’ which came in ending of September as an Independent gift to his fans ushering into October 1st. ‘Joro’ brought up some controversy between him and producer Northboi who called him out for not giving him credit and signing a contract for the song. Most people also bashed the song tagged it a wack effort from Wizkid but the music video continues to gain massive views.

Later in 2019 Wizkid did his Starboy-fest in France (Paris), Manchester and at the 02 Arena, London. The 02 was
a shut down show when Naira Marley graced the stage with him. He left his fans thrilled althrough the show with performances from different A list artistes which flew to honor him.

Almost when Wizkid fans thought he was done he dropped a surprise EP titled the “SoundMan Vol. 1” and then rounded the year up with his Starboy fest in Lagos.

There’s no doubt that this two artistes did well in 2019, But after their listed outputs some fans still feel Wizkid should be placed ahead of (before) Davido when listing the Best Nigerian Artiste of 2019. While some feels Davido did far better than Wizkid in the calendar year.

Now over to you all, Judging from what both artiste achieved and released in 2019, who do you think did better and should be ranked first, Davido or Wizkid?