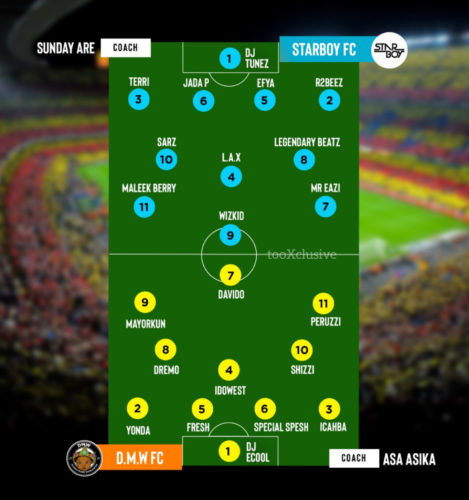 The results came in interestingly as we were able to make a first eleven squad of all the artistes and associates that came to mind with Davido and Wizkid spearheading the attacks of both teams and Asa Asika & Sunday Are who are both artistes’ managers taking up the coaching duties.  However, we imaging these two as football teams coming head-to-head in a match, who do you think would win? And also Which Team Do You Think Has The Better Squad of The Two teams?

Nifemi is a graduate of the University of Lagos. He's a unique user of the pen when it comes to the expression of whatever. He is editor-in-chief of the organization and also a writer of news, articles, editorials and a lot more to help expand the level of knowledge of the readers and simultaneously have them entertained. A lover of music and football is who he is and a Man Utd die-hard.
Submit your comment
44 total pingbacks on this post
Popular Posts