Did Joeboy Tear A Leaf Out Of Omah Lay’s Book For One More Monster Hit? ‘Alcohol’ 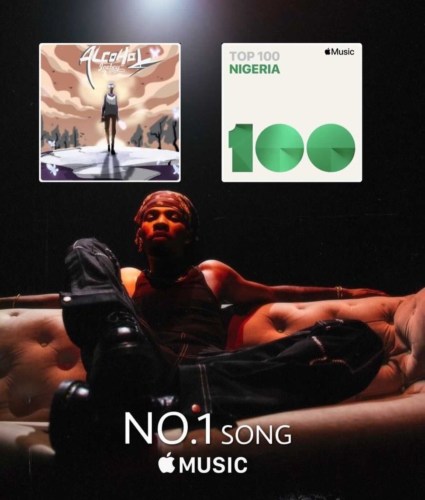 Alcohol is an absolute Omah Lay style jam and was produced by Omah Lay’s frequent collaborator Tempoe, and fans are wondering if this is a one time stint or a new, experimental Joeboy in the works.

Whenever I think about one promising act in the industry who needed a monster hit to maintain his relevance in the new Afrobeats Vanguard, Joeboy certainly comes to mind.

The Baby crooner’s 2021 debut album ‘Somewhere Between Beauty & Magic’ was an A-rated debut, and it did reasonable numbers on streaming platforms, but lacked any major hit, international or continental monster hit to compete with the immensely successful projects that were also released after the COVID-19 lockdown.

The inability to tour or perform at events, or adequate media rounds during the lockdown also affected the album from performing better than many of its contemporaries.

Although he scored a few huge numbers, such as; ‘DOOR’, a brilliant feature with Ghanian superstar Kwesi Arthur, ‘FOCUS’, and ‘SHOW ME’, none was big enough to complement the momentum he’d been on since he made an entry into the industry, and he has since relinquished his position in the top to the likes of Tems, Omah Lay, Bella Shmurda, Lojay, who used the lockdown as a medium to cement their place in the new vanguard of Afrobeats.

Fortunately for Joeboy, the lockdown is over, concerts and tours are getting back in the game, clubs are open, and almost when everyone thought him losing the backing of Mr Eazi’s emPawa Africa imprint was going to signal the end of his career, Joeboy shoots back to the moon with frequent Omah Lay collaborator Tempoe.

Although Alcohol isn’t the Nigerian graduate of Sarz Academy’s first rodeo with Joeboy, he’d previously worked with him on Door, but Alcohol certainly takes Joeboy out of his comfort zone, giving him an AfroFusion beat that just reminds you of Omah Lay’s soul-piercing hybrid Afro Life.

Alcohol became an instant hit across Africa, the continent already opened up to this blend of Afrofusion.

It may be quite prudent of us to agree that this blend of Afrofusion is a tad different from Joeboy’s usual R&B-influenced Afropop. Although the theme is different, on this record he also leans into heartbreak and explores the dark side of music to unruffle emotions, this is definitely Omah Lay’s territory and Joeboy rides the waves so expertly.

It is not surprising that all over Africa, thanks to TikTok, the song has transformed from just a hit song into a continental trend, that sees many young Africans pouring different liquid substances on their body to the point where Joeboy had to plead with his fans to avoid pouring hazardous substances on their body to express how relatable the song was to their emotions.

It is important to also note that this kind of artistic expressions should be encouraged among our younger artistes as they contribute to the overall growth of the Afrobeats Mothership. It is time for the Nigerian audience and creators to embrace collaborations, not just features, and artistic freedoms that allow them to lean into each other’s variation of Afrofusion to serve the global audience even more gems like Alcohol.

It is a moment of global awakening for Afrobeats, and the more our artistes are able to effect successful comebacks like this by merging varying blends of music mostly rooted in our culture and equally borrowing from the Western hemisphere, the bigger the movement gets and the farther we conquer the world with our music.

Do you agree? I’d love to hear your comments.

Bisi-Taiwo Chukwumerije is a blood-bound Nigerian music journalist in his early 20s. He goes by the pseudonym ‘AfrobeatsMerije’, and considers himself one of the greatest psyche in Afrobeats. @AfrobeatsMerije.