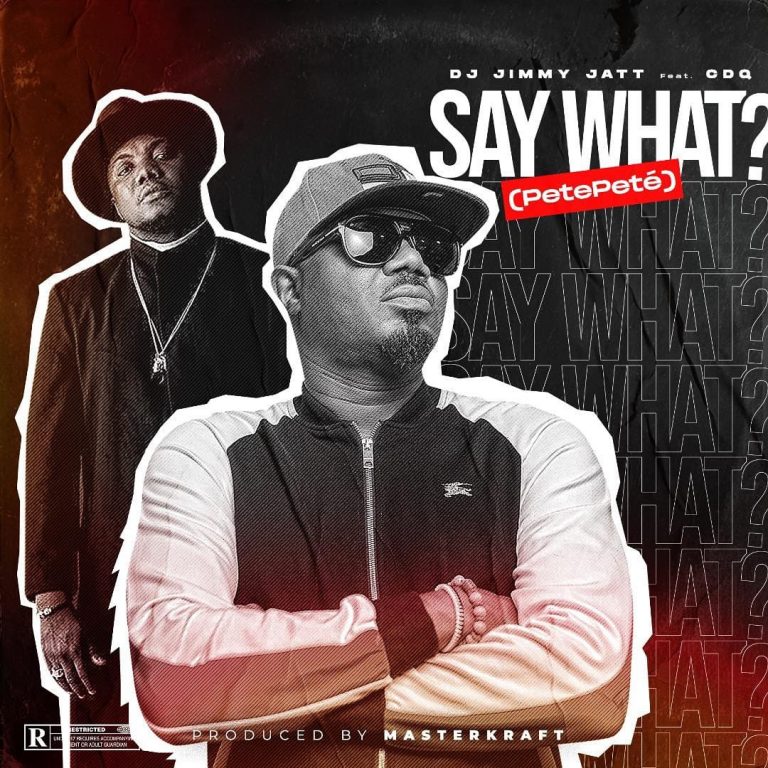 ‘Say What?’ (PetePete) delivered by DJ Jimmy Jatt x CDQ… Veteran disc jockey Jimmy Jatt releases a brand new tune for the Rap culture. To achieve this he employs the services of Street general, Ibile Mugabe-CDQ who blessed him with his indigenous street rap vibe. This song is a pure Hip-pop record with quality production from award winning producer, Masterkraft.

Born and bred in Lagos Island, Jimmy Amu, popularly known as Cool Dj Jimmy Jatt is a renowned Disc Jockey who is known for setting the pace for Hip hop music in the country and beyond. An icon in the Nigerian entertainment industry who has come a long way and a veteran who has survived the test of time. Formerly, known as Master J, Dj Jimmy Jatt came into the music industry as a rapper with lot of demos but after a fruitless search getting a record label to support him, he started deejaying with the support of his brothers. The stage name Dj Jimmy Jatt came in honour from the initials of his brothers who long passed on the touch to him. He developed an interest in Hip hop and rap at an early age and grew up listening to a lot of rap albums from the late 70’s. To promote Hip-pop culture he organised a ‘Jimmy Jump Off’ show and studio session where artistes, rappers come in to drop banging rap freestyles.

Staying true to the Hip-pop culture he linked up with CDQ for this hot hardcore Rap track ‘Say What?’ (PetePete). On the song CDQ goes hard with heavy bars, dragged M.I Abaga and threw shots at some Nigerian rappers. He hits hard at Mr Incredible (M.I Abaga) says he is the high definition (HD) of M.I, M.I can’t be higher than him and also he is not a rapper that would sell his soul, Kiss Ass for the doe, shed blood to glow and suck d**k for the blow. There are lots of word and shades on this record… Listen and share your thoughts below,