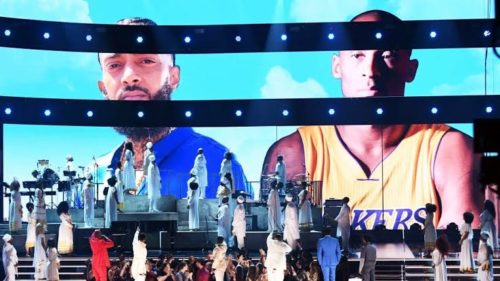 Nipsey Hussle and Kobe Bryant were both given tributes at the 62nd annual Grammy award ceremony last night and it was heart-wrenching.

Nipsey Hussle alone was to be given a tribute by his fellow rappers but the world was rocked with another major loss when basketballer player Koby Bryant and his 13-year-old daughter Gianna, died during a helicopter crash and the news of his sudden death, the NBA legend alongside his daughter were also given an emotional tribute.

The images of both men were placed on display as Meek Mill, DJ Khaled, John Legend, YG, Roddy Ricch, and Kirk Franklin all paid their respects through songs.