Does Burna Boy Truly Deserve To Be Called “Odogwu” (The Champion) ?…. My Thoughts 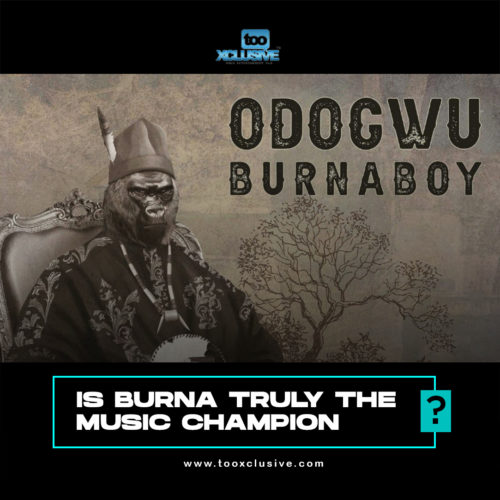 Grammy-nominated singer, Burna Boy released his first single of the year “Odogwu” and it is of importance that a review is done.

Before proceeding with the review, it is important to go back to the controversy started by Burna himself before the release of the track. Burna didn’t just wake up one morning to declare himself the “Odogwu”. The singer caused real chaos on social media that went on for days and is still ongoing – he declared himself the best after Fela and also bragged about paving the way for himself.

FACT! I always knew I was and I am THE BEST. Everyone you think is the best KNOWS I’m BEST since Fela Kuti. But @timayatimaya told me something a long time ago that made me not care about being the best. “The World can do without the Best” the world will still spin regardless.

“Lol. NOBODY paved shit for me. Everybody dey find them own. I bin Out here, if you knew the way they made us look weak by begging and paying the western world to like us you will see that no table was set and I’m the one that brought you the Respect you currently enjoy.”

There are so many Nigerian artistes doing a good job in putting Afrobeats on the map so his declaration didn’t go down with a lot of music fans. Burna was labeled as “Arrogant”, ‘Bat shit Crazy” and so many other derogatory names you can think of. But just when we thought the whole drama had died, Burna brought the topic back with the release of his new track – “Odogwu” (An Igbo word that means Hero – Champion)

Before listening to a song, its title and artwork should do a good job in making you want to really listen to the song and should also prepare your ears to what you’re about to listen to. For our non-Igbo brothers and sisters, ODOGWU translates to “VICTOR”, “LEADER” in English. It is common with the IGBO tribe in Nigeria and primarily used by males. It is used to describe a man that has done great things and Burna well seems to have done many great things in the Nigerian music industry

“Odogwu’s” artwork did not fail to impress as shown, a Gorilla which portrays the African Giant clad in an Igbo chieftain’s attire seated like a powerful ruler. This again tells the kind of message Burna is trying to pass across.

Honestly, the record was a new innovative take because it’s a blend of highlife with a dash of Afro-pop and hip-hop. I think we might have to get accustomed to this new sound from Burna and it feels like he’s going to bring in something similar for his next single. The track, I believe a continuation of his famous rant. Lyrics like “Say na who they draw the map e o? (Odogwu). You are looking at the champion (Odogwu)” immediately tells you that he is not done bragging about being the Champion, the best after Fela.

Burna did great on the vocals as usual and yes we like new and creative stuff but we can’t dwell only on the good side. One thing that completely set me off was the constant repetition of the word “Odogwu” because it made it quite boring. You don’t necessarily have to learn the lyrics because everything ends with Odogwu. Unlike its artwork and title which seemed like we were about to be fed with some real hardcore stuff, the song itself failed to meet up with its own standards. (Lyrically, Burna Boy failed on the first Verse and the second verse delivery also wasn’t up to standard)

The video? Another creative effort from TG Omori because it gave life to the entire picture Burna was trying to paint. Costumes, lighting, background, everything was absolutely stunning and totally on point. It gives viewers most especially those that are not aware of the culture, the true beauty of the Igbo culture that rarely gets exposure.

On an ending note, Burna needs to understand that being the best no be by mouth alone. We’ve seen what happened with “African Giant” and we want more. Show us that you’re really that African Giant that you claim to be! I’ll be giving this track a 6 out of 10 ratings.

Do you have a contrary view? Do drop your opinions in the comment section below.

Olaosebikan Olabimpe is a News Writer and Content Creator at Tooxclusive. Her idea of a great day is to be indoors snuggled up with a book and good music. She is also a passionate lover of rap.
Website
Submit your comment
10 total pingbacks on this post