“Duduke” Versus “Nobody”… Which Is Your No.1 One Song? 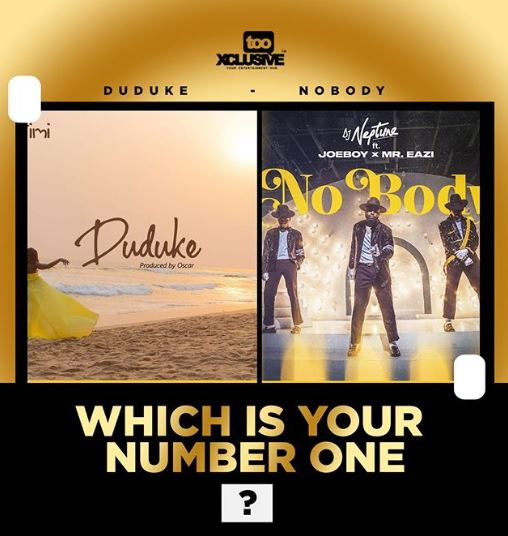 Despite the lockdown caused by the coronavirus pandemic, Nigerian artistes have continued to feed us with superb and quality music. While some artistes have shied away from releasing music during the lockdown, some took the risk and it turned out great.

We have picked out two songs that are bangers and Simi’s “Duduke” and Dj Neptune’s “Nobody” fall into this category. The songs were played in every nook and cranny, enjoyed by both young and old and even unborn babies. Even if you’ve not been active online on social media, you would agree that the songs are arguably the best songs released this year.

This track was released as Simi’s first single of the year and it did not disappoint. “Duduke” is used to describe the sounds produced from her heartbeats while she longs for a loved one. At the time of its release, It truly felt like a love song but little did we know that Simi’s intentions were way deeper than a regular love song. The video later showed that she wasn’t referring to her husband, Adekunle Gold but her unborn child.  You don’t even have to be a pregnant woman or a female to enjoy this track because it preaches love and also spreads positivity.

The award-winning disc jockey recruited Empawa acts, Joeboy and Mr Eazi to deliver a hit love song. The track is the second single off his highly anticipated project “The Greatness II [Sounds of Neptune]“. The hilarious and colorful video sees the three music acts pay tribute to the late King of Pop, Micheal Jackson. We get to see them doing the infamous crotch-grab, moonwalk, and a few kicks here and there. You can’t help but love this tune because it’s highly addictive and never gets boring.

These two songs rocked the music scene and are still receiving massive streams and climbing charts. They both have different contents, vibe, and sound, and because of this, some music fans tend to prefer one over the other. This is why we have brought forth this question for our fans and readers… Which is your number one song? “Duduke” or “Nobody”

Song Written by Portable and Barry Jhay - "All Eyes On Me Lyrics"... "All Eyes on Me" featuring Barry Jhay...