Wizkid has caused an uproar among his fans on Twitter after returning to the social media platform in over 8 months.

The Starboy announced in the beginning of the year that he would be taking a break from the social media platform and would be returning in March, but to everyone’s surprise he never returned which made every of his fan downcast as they have not been able to witness the fantasy of having the superstar singer have a conversation with them.

However, today got so bright for the singer’s fans as he made a return to Twitter in over 8 months. As expected, since his return, Twitter has gone wild as his fans have made sure he starts trending on the platform.

They are welcoming him back and it surely is a joy to witness. 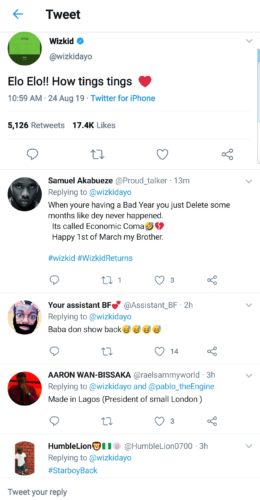 “Fans Go Wild As Wizkid Returns To Twitter Nearly 9 Months After Vacating The Platform”, 5 out of 5 based on 11 ratings.