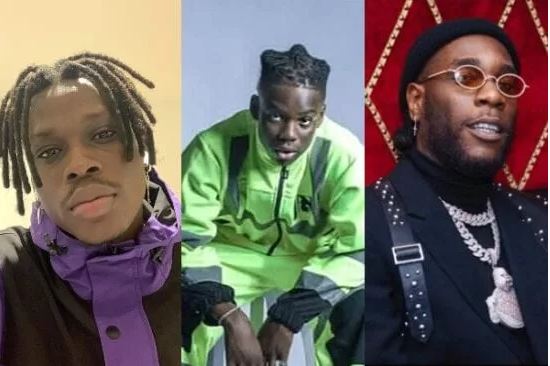 Nigerian superstars, Fireboy DML, Rema, and Burna Boy have been featured On the incoming FIFA 21 Soundtrack.

The Nigerian music scene has another reason to jubilate as it continues to receive recognition worldwide. Fireboy DML makes his debut on football simulation game FIFA 21 as his single ‘Scatter’ off his debut album “Laughter, Tears & Goosebumps” got listed as one of the official soundtracks for the latest game release. This comes after Fireboy’s song, “Champion‘” got used by European Champions, Bayern Munich.

He is one of the few distinguished artistes featured on the main soundtrack as other Nigerians have features on the Soundtrack are Rema with “Beamer” and “Location” by Santa Dave, a British rapper of Nigerian descent and features superstar, Burna Boy. The Official FIFA 21 game soundtrack is set for launch worldwide on the 9th of October 2020, for PlayStation 4, Xbox One, and PC.

‘Scatter’ on @easportsfifa FIFA 21, get the soundtrack playlist on all DSPs. game officially out on the 9th of October. #FIFA21 #FIFA21Soundtrack

Olaosebikan Olabimpe is a News Writer and Content Creator at Tooxclusive. Her idea of a great day is to be indoors snuggled up with a book and good music. She is also a passionate lover of rap.
Website
Submit your comment
6 total pingbacks on this post
Learn More