Global Citizen, in partnership with the Lagos Govt, Access Bank, set to host live event amidst campaign to fight poverty 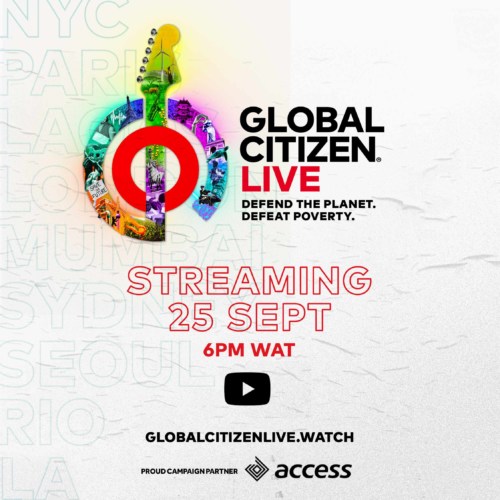 The international advocacy organisation, Global Citizen, supported by the Lagos State government and Africa’s leading retail bank, Access Bank, is set to hold a 24-hour live broadcast on the 25th of September, 2021, with events and performances filmed across six continents aimed at uniting the world, defending the planet and defeating poverty.

Global Citizen Live is part of Global Citizen’s 2021 global campaign, a Recovery Plan for the World. Resolving COVID-19 for all, ending the hunger crisis, resuming learning for all, safeguarding the planet, and increasing equity for all are the five core objectives of the Recovery Plan. The broadcast will feature musicians, celebrities, and world leaders from six continents working together to make a change and impact climate and poverty.

In Nigeria, Global Citizen is working in tandem with the Lagos State Government, Access Bank and other partners to create a limited-capacity event in celebration of Nigerians working on the frontline in the fight against the COVID-19 pandemic, which would feature on the final international live broadcast towards the end of September.

Speaking of his excitement for the cause, Lagos State Governor, Babajide Sanwo-Olu, said that the state “is thrilled to be a part of Global Citizen Live. With the challenges of rising poverty, hunger and vaccine inequity facing Africa, we need businesses and governments around the world to respond to the call of citizens, stand in solidarity with the people of Africa, and commit to defending the planet and defeating poverty and inequality.” 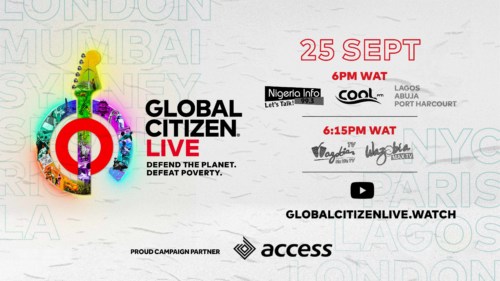 The Group Managing Director,  Access Bank PLC, Dr Herbert Wigwe, also declared full support for the cause stating that the Bank  “strongly aligns with Global Citizen’s goals and objectives, a profound desire to ending the COVID-19 scourge, addressing the global food crisis, achieving education for all, advancing equity, and protecting the environment.”

“In recognition of our responsibilities as a corporate organisation, we have devoted resources to minimise our carbon footprint while also being at the forefront of stimulating environmentally responsible stewardship, development, and sustainability innovation,” he added.

The Global Citizen Live event will feature performances by Davido, Tiwa Savage, Made Kuti, and Femi Kuti, among others, hosted by local TV celebrities Ebuka Obi-Uchendu and Nancy Isime.

With over 10 million monthly advocates, Global Citizen is the world’s largest movement of action takers and impact makers dedicated to ending extreme poverty by 2030. The Global Citizen Live is supported by a corporate coalition, including Access Bank in Nigeria, alongside global partners like The Coca-Cola Company, Google, Live Nation, P&G, Verizon, and many others.