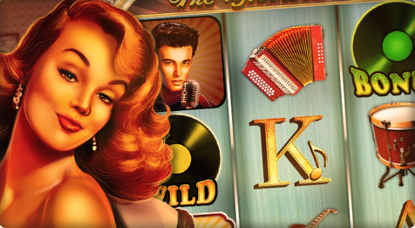 The beauty of online slots is that they are available with all sorts of themes, meaning there is something for everyone. Music fans included. Finding the best online casino which features online slots can be tricky, there are so many operators out and of course some are better than others, but what makes an online casino stand out from the crowd?

If you’re looking for an online casino with a difference, 777 Casino have gone with a design which really captures attention. The design is made up of the iconic glam, glitz and style of retro Vegas, they feature a great selection of slots which complement the design, including the Glorious 50’s slot, making it a completely unique online casino, especially if you’re looking for music-themed slots.

Below we’ll look at four online slot games that are based around the music scene.

About the game:
Kicking it off at number one is this Guns N Roses themed slot game, featuring the legendary band Guns N Roses. Complete with your own private serenade of Sweet Child O Mine as you enter the game, this one also features multiple rewards and bonuses including encore free spins, legend spins, a solo multiplier and a crowd-pleaser bonus. Players are able to choose from a set list of five songs whilst playing this game, including Paradise City and Welcome to the Jungle.

About Guns N Roses:
Guns N Roses are an all-American, Hard Rock band based in Los Angeles, California. The group first formed in 1985 and were signed to Geffen Records just a year later. Having acclaimed international success with the likes of Civil War and Use Your Illusion, the band have completed multiple world tours, as well as having won multiple renowned awards and featuring on the cover of publications such as Rolling Stones.

Whilst it hasn’t been all roses for this band throughout the years, with various escapades including drugs, assault and racist accusations over some of their music, there’s no denying that this legendary band brighten up this slot game.

About the game:
With a worldwide fan base and multiple generations falling at his feet, Jimi Hendrix is one of the most well-known rock guitarists to date. What’s even better, the Jimi Hendrix slot game is highly lucrative, with its themed slot titles and topical bonuses, including little Wing Free Spins, and the Purple Haze Free Spins bonus.

The game features 20 paylines and 5 reels, with combination wins up to a jackpot of 400x. It also features a particularly high RTP at 96.90%, and did we mention the bonuses!

About Jimi Hendrix:
Considered one of the most iconic music icons of the 20th century, Jimi Hendrix was a household name. Tragically, his career ended just as he was getting started when he passed away at the young age of 27. Jimi cited that his inspiration had come from the likes of Buddy Holly, Eddie Cochran, Elmore James, B.B. King and most notably, Muddy Waters.

Whilst we may have lost a legend, his music still lives on into the next century, where today we are lucky enough to enjoy a Jimi Hendrix themes online slot game.

About the game:
Powered by SG interactive, this online slot game features the king of pop himself, Michael Jackson. Featuring your typical video slot setup, this game includes 5 reels, 3 rows and 25 paylines. This game is a must for Michael Jackson fans as it features the star as a symbol in the jackpot and bonuses, with other symbols also featuring his iconic glove and hat. Whilst playing this game, players are able to listen to a number of MJ hits, including Beat It, Billie Jean and Smooth Criminal.

About Michael Jackson:
Born in Indian, USA in 1958, Jackson rose to fame as a child star by being part of the Jackson 5 musical group. As one of the legendary artists we have ever seen, MJ gained recognition for his solo career during the 80’s with his best selling album ‘Thriller’. Whilst Jackson’s life came to a tragic end in unfortunate circumstances at his Hollywood home in 2009, his music and legendary nature will continue to live on for many years.

4. The Phantom of the Opera online slot game

About the game:
For those who prefer something a little more traditional, the Phantom of the Opera online slot game features 243 ways to win as it pleases fans with authentic imagery that’s captured in symbols of leading characters from this musical. Some of the featured content includes Music of the Night free spins, Masquerade bonus, or All I Ask of You free spins, as well as a further 2 randomly triggered features, Chandelier bonus and Letter bonus. What’s more, the game features some iconic soundtracks, bringing this timeless classic to life once again as an online casino game.

About Phantom of the Opera:
The Phantom of the Opera is a classic novel that was adapted into a musical in 1986 by the legendary  Andrew Lloyd Webber. Based on the 1910 French novel, the musical has featured on Broadway, as well as winning many notable awards, including the Oliver Award and the Tony Award for Best Musical Performance.

So, whether you’re a seasoned online slot game player or just dipping your toe in the water, these games should be high on your list to play this summer.

“Great online slot games that get their inspiration from the music scene”, 5 out of 5 based on 1 ratings.