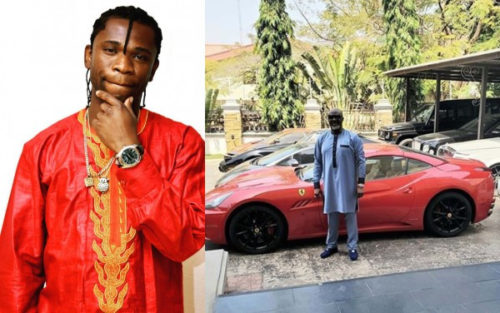 Senator Dino Melaye has responded to Speed Darlington calling him out over his expensive fleet of cars.

Just recently, the singer called out Dino Melaye for flaunting his exotic cars on the gram. According to him, there’s no way Dino could have amassed such wealth in such a short time as his only job was to be a senator. He believes Nigerian senators are not paid to an extent where they get to acquire such exotic toys.

However, Dino responded to the singer saying he can do whatever he wants with his money. The senator stated that people who have passion for something would go through extreme lengths to spend what they have on that thing and he gave several examples. Dino added that his passion is to collect automobiles and he would keep on acquiring more cars because that is what makes him happy.

He wrote “Everyone spends money on what he/she likes. My passion is to collect automobiles. Occults can buy blood for any amount, homosexuals spend so much on the same sex, some on Babalawos, some his their money in Switzerland while some busty ego under the ground and some spend on cocaine. All man go do what makes him/her gappy. Me am happy i no even know say you dey vex. kuro lona jare”