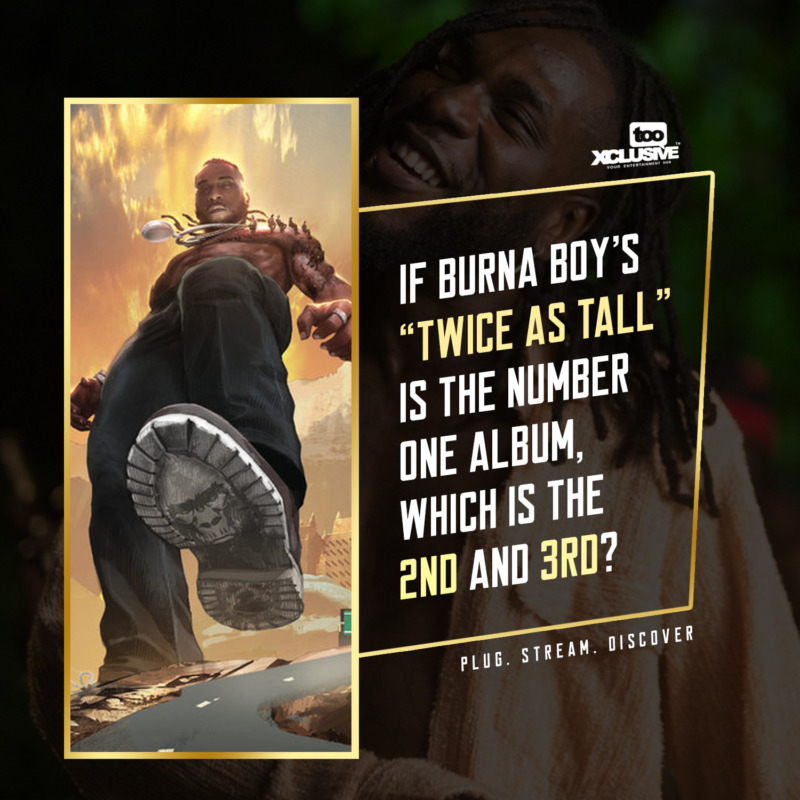 Released as a follow up to his critically acclaimed “African Giant,” Burna Boy dropped the outstanding “Twice As Tall” on the 14th of August 2020. The 15 track album which was later nominated for the 2021 Grammy awards for Best World Album has features from Diddy, Naughty By Nature, Chris Martins, Sauti Sol, and Youssou N’ Dour making the album a unique one with diverse sounds.

Due to its message, production, and style, the album has been named the number one album in the country. Of course, his album is just one of many released in the Nigerian music scene this year 2020, Tiwa Savage, Fireboy DML, Adekunle Gold, Olamide, Wizkid, Davido and others also Dropped, So there’s got to be a second (No. 2) and third best album.

This has brought us to ask our fans and readers, If Burna Boy’s “Twice As Tall” Is The Number One Album, Which Is The 2nd & 3rd… respectively?

Do drop your thoughts in the comment section below

Olaosebikan Olabimpe is a News Writer and Content Creator at Tooxclusive. Her idea of a great day is to be indoors snuggled up with a book and good music. She is also a passionate lover of rap.
Website
Submit your comment
13 total pingbacks on this post