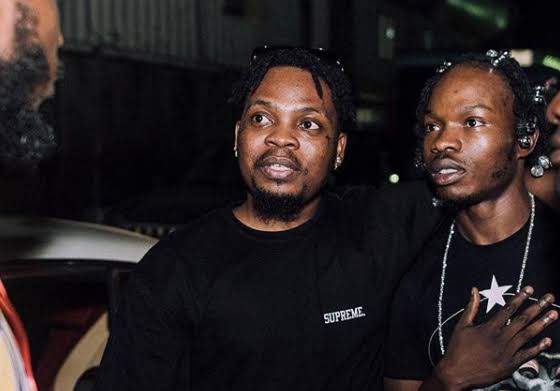 Olamide and Naira Marley partied together at a club in Lagos last night and there was a scene created by the two singers that got a lot of people in the dark.

Olamide’s love for Naira Marley is not hidden to many as the key role he played in making sure the formerly based UK singer won the first stage of his battle against the EFCC is still very much fresh in the heads of music fans and Marlians. However, while both were partying and enjoying the rocky moment of the night, Olamide got all over Naira Marley like a lover would do to his partner and this has raised a few questions from music fans.

The video has been uploaded below for you to watch, is there anything wrong with it?

“Is There Anything Wrong With What Olamide Did To Naira Marley In This Video || Watch”, 4 out of 5 based on 41 ratings.

Nifemi is a graduate of the University of Lagos. He's a unique user of the pen when it comes to the expression of whatever. He is editor-in-chief of the organization and also a writer of news, articles, editorials and a lot more to help expand the level of knowledge of the readers and simultaneously have them entertained. A lover of music and football is who he is and a Man Utd die-hard.
Submit your comment
10 total comments on this postSubmit yours
Popular Posts