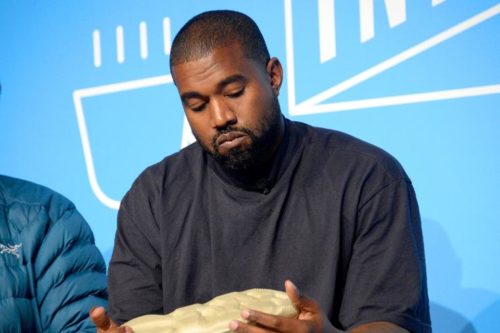 Upcoming brand, Infinity G8ds allegedly sent Kanye their line & were invited to Atlanta only to see that Ye allegedly used their design in his “Donda” merchandise.

Kanye West is still quite busy putting finishing touches to his project, Donda, however, is being accused of stealing Brand designs after meeting with them.

In a TikTok video, Infinity G8ds shared their side of the story as they added video clips of their experience. Randy was invited to send Kanye West a gift of his upcoming line @infinityg8ds. Sound on!!!!!! I recorded this video of Randy on a FT call with Kanye West inviting him to Atlanta to meet with him. He loved the items, the materials, and the design! The call was labeled with the date July 24, 2021.

According to reports, the team drove 9 hours to Atlanta, signed NDAs, and showed videos of themselves inside of the stadium waiting to sit down with Kanye for a meeting.

They showed that the Infinity G8ds design is a six-pointed star, resembling the Star of David, with an infinity symbol wrapped around a cross in the middle. Ye would also use that exact design, except in the center, the rapper took out the infinity symbol and left the cross.