Khaligraph Jones Vs Blaqbonez… Who Is Winning This Battle? 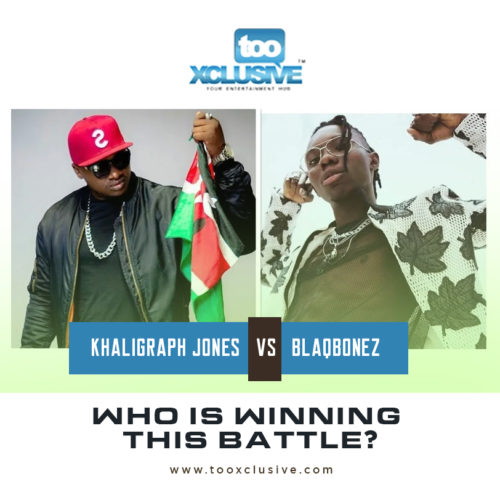 Over the couple of days, Africans have been highly entertained with the Khaligraph Jones – Blaqbonez beef. Shots have been fired, secrets have been spilled and tears have been shed and fans can’t get enough of the drama. The beef also birthed a Kenya Versus Nigeria war on Twitter that has seen many fans shred each other into pieces.

After winning the Soundcity MVP award for the Best Rapper In Africa, Khaligraph Jones was called out by self-acclaimed Best Rapper in Africa, Blaqbonez who believes that he doesn’t deserve to be called the best in the game. Mr Boombastic as he is fondly called promised to drop a diss track to prove his point. However, for an unknown reason, he apologized to the rapper confessing that he was never serious about his statement.

Unfortunately, it was too late as he had already walked into the lion’s den as Khaligraph wasn’t willing to let go without a fight. In a bid to revive hip-hop in Africa and also teach Nigerian rappers on how the rap game is done, the Kenyan rapper released “Best Rapper In Nigeria” to diss the young rapper and all hell broke loose. Blaqbonez came back within 24 hrs to reply him with ‘Green Blaq Green‘.

Khaligraph is known in Kenya and other parts of Africa as a mixed breed; a rare lethal mixture of Eminem and veteran rapper, Mode Nine. Also known as the OG, the rapper can comfortably rap in his native tongue and in English making him a dangerous one and one of the few rappers who has mastered the art.

Blaqbonez on the other hand who probably has been waiting for this moment his entire life couldn’t be more happier as he engaged in rap battles before embarking on the journey to be a rapper. This is his chance to show his lyrical prowess is unmatched.

Rap isn’t for the weak-hearted. Unlike pop or any other genre, it’s a culture, a way of life. In situations like this, the best way is to settle it out is with a face-off between the two rappers. A rap battle would give insight to the real beauty of the rap culture and also who deserves to be crowned king. Just like how a lion needs to have a brawl with another male to remain the pride male of the pack, rappers need to do the same.

Notwithstanding, we have to appreciate the efforts of both tappers for their hard work and creativity to come up with a career-destroying diss. But there can be only one winner and this has brought us to ask; Between Khaligraph Jones and Blaqbonez, Who Is Winning This Rap Diss Battle?. (Who Got The Best Bars & Flow)

Do let us know in the comment section below

“Khaligraph Jones Vs Blaqbonez… Who Is Winning This Battle?”, 2 out of 5 based on 6 ratings.

Olaosebikan Olabimpe is a News Writer and Content Creator at Tooxclusive. Her idea of a great day is to be indoors snuggled up with a book and good music. She is also a passionate lover of rap.
Website
Submit your comment
53 total pingbacks on this post
Click here