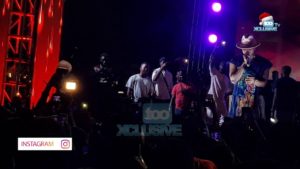 Kizz Daniel didn’t leave Mayorkun alone to do the performance of their hit single; “True” at “The Mayor of Lagos Fest” last weekend.

The “Eko” singer while Mayorkun was approaching the second verse of the song stormed the stage in some really majestic fashion. He took the microphone, spoke his amazing voice into it with the song coming out with some extra, unique touch. As expected, the crowd got crazy at the entrance of Kizz and he didn’t disappoint with his “big boy” performance.

“Kizz Daniel Joins Mayorkun On Stage At The Mayor Of Lagos Fest For Performance || Watch Video”, 5 out of 5 based on 2 ratings.