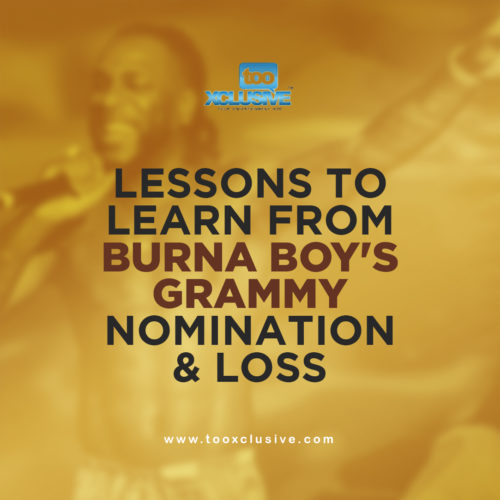 Burna’s nomination at the 62nd Grammy awards which took place in Staples Centre, Los Angeles, California came as a total shock. Why? Nigerian music fans were so engrossed with the rivalry between Wizkid and Davido and failed to see that any other person could achieve such feat.

That’s a topic we would not be delving into as it is worthy to note that there are a lot of lessons to learn from the singer’s Grammy nomination. His nomination should serve as an eye-opener to the other folks in the industry telling them its not just about releasing a song to garner 75 billion streams or for it to spend years on a music chart.

Its entails so much more and requires creativity and passion. These are points that other artistes should take notes if Afrobeats is to be recognized on an international level. We have constantly hammered on these points but it is sad that it had to take a Burna Boy Grammy nomination for things to be much clearer.

The notion that Nigerians no longer desire good lyrical content because all they want to do is dance was thrashed with the release of “African Giant”. Burna Boy sang not just about love and relationships but also weighed into issues plaguing the country and calling out the government following the footsteps of the Afrobeats king, Fela.

However, It is not the first of its kind but it is the only one that was able to receive such recognition. Some artistes still put in the work to release such music but Nigerians have failed to listen and with this Grammy nod, they would be motivated to improve more on their pen game. Let’s face it, Burna has sort of raised the standards and it is expected that other A-list artistes should follow the trend when it comes to delivering quality content.

Not advising that every artiste should slam the government with music but the main deal here is let your music pass a message, let it have meaning, let that fan gain something from your music and still groove or dance to it. We do not realize that music is so much more than what we think; it’s a fundamental aspect of humanity. It has the ability to change thoughts, emotions, everything you can think of.

There’s nothing spectacular about the Nigerian music industry again, right now if it’s not about money, bragging about sleeping with 15,000 girls in 2 minutes, it’s about the drugs, the hustle and the other nasty business we do not want to hear about. Let’s hear something new! Something fresh and exciting! (Tell a lovely and impressive story with good sound).

Sadly, this is what African Giant lacked. The album was strictly afrobeats without the infusion of other genres and languages from other countries. Burna sang in English, Pidgin and other Nigerian languages but the foreign folks are not aware that such language actually exists. That was why the album lost to Celia because it’s a world category and not for a Genre (Burna Boy himself needs to learn from this and diversify on his next album if he truly wants to bring home the Grammy ‘Best World Album’ Award home)

Nigerian artistes need to work on being creative with merging different cultures outside the country/continent and still not totally deviate from delivering the Afrobeats feel. New genres of music are being created, and new ideas are being incorporated into, give better musical experiences for lovers of the art and I believe Nigerians should also aspire to achieve this. Let the foreign folks get excited to hear our songs, learn our language, our culture, everything about us!

Surely no one would want their body of work to “flop” especially if it’s an A-list is involved. However, artistes these days get carried away with wanting to sell-out shows, celebrate streams and eventually lose their purpose. Some artistes would say “Give them what they want, cash out and let’s squander all that money”.

Some of our big artistes (I won’t call names) are guilty of this and have succeeded in passing this to the upcoming ones. Everyone is all about money and fame and it’s really sad. Notwithstanding, these points also apply to Burna too but it is certain that after losing the award to legendary, Angelique Kidjo he would definitely do things differently henceforth.

Nigerian music deserves so much more recognition than what it is getting now. Our artistes need to improve on themselves in order to break into the international market as they have always desired. So far no one has been able to achieve that. The sad truth is that we are the only ones that can sell Afrobeats, we are the real originators, no one can do it better than us, not the Grammys or another award. That is even one of the reasons why the Grammys would create an Afrobeat category because truth be told Nigerians will be the ones bagging the Award, Year in, Year Out. The sooner we realize this, the better.

This article is for the Starboy himself, Wizkid who’s next album already has everyone on their toes, Please give us a complete package that will captivate Nigeria and also the world. Then to Burna Boy who is also working on his next album (Learn from the previous fall) and not to forget other Nigerian artistes. Davido on the other hand has a fresh album out ‘A Good Time‘ (Lips sealed on that for now) but if he is also going to give us another album this year then he isn’t excluded. Long Live Nigerian Music!

Do you feel there are more lessons that Nigerian artistes should take note of apart from the ones listed above? Do drop your suggestions in the comment section below.