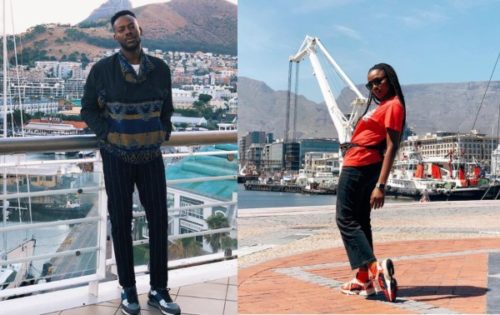 An LGBTQ magazine has gotten rid of Adekunle Gold’s feature after Nigerians accused Simi of apologizing for her past homophobic comments only because of her husband’s feature.

It would be recalled that Simi tendered an apology yesterday to the LGBT (Lesbians, Gay, and Bisexual, Transgender) Community over her derogatory remarks in the past. Simi in her Youtube series “Stoopid Sessions” stated that homosexuality is wrong. Due to her statement, she was called out by Gay activist, Bisi Alimi called out Simi for being a disgrace and for promoting homophobic violence

In a lengthy letter addressed to the LGBT community yesterday, Simi stated they don’t deserve the hate or don’t deserve to live in fear because of who they are. She apologized for carelessly addressing an issue that was a matter of life and death for many and said it was never her intention to hurt anybody

However, Nigerians have called her out for apologizing only because Adekunle Gold was recently featured in an LGBTQ magazine and now it appears the magazine would no working with the “Something Different” singer

LGBTQ magazine gets rid of AG baby as Nigerians accuse Simi of apologizing for her past homophobic comments only because of her husband’s feature. [Swipe]

“LGBTQ Magazine Gets Rid Of Adekunle Gold’s Picture After Simi Gets Accused Of Apologizing Because Of Husband’s Feature”, 5 out of 5 based on 1 ratings.