Livespot X Festival: Burna Boy, Fire Boy, Tiwa Savage and Others To Perform Alongside Cardi B 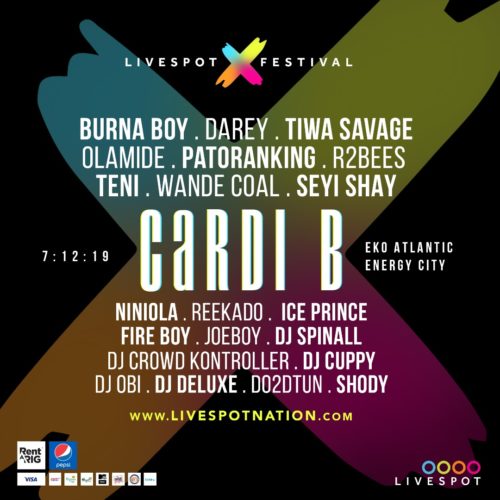 It’s no news that rapper and social media sensation, Cardi B will be making a trip to Africa this December for the first installment of the Livespot X Festival; a 2-day event which will be held in Nigeria on December 7 at the Eko Atlantic Energy City and in Ghana on the 8th at the Accra Sports Stadium.

The festival is poised to be one of the biggest music events of the decade as the organizers have just revealed a star-studded list of artistes that will equally be gracing the stage. The lineup includes Grammy-nominated pop star, Burna Boy, Afro-soul singer, Darey, Tiwa Savage, Fire Boy, Teni, Wande Coal, Olamide, Joe Boy, Reekado Banks, Seyi Shay, R2Bees, Ice Prince and Niniola.

“We know how much love the fans have for Cardi B and this was one of the reasons we chose to give fans a special experience to see the queen of hip-hop live in Lagos. We also are aware of the massive appeal of some of our Nigerian music acts. This show will not be complete without these music stars, and this is why we are thrilled to announce these performing acts for the Livespot X festival.” cited Dare Art Alade, the Chief Creative Director of Livespot360.

Tickets to Livespot X Festival can be purchased online at Livespotnation.com.