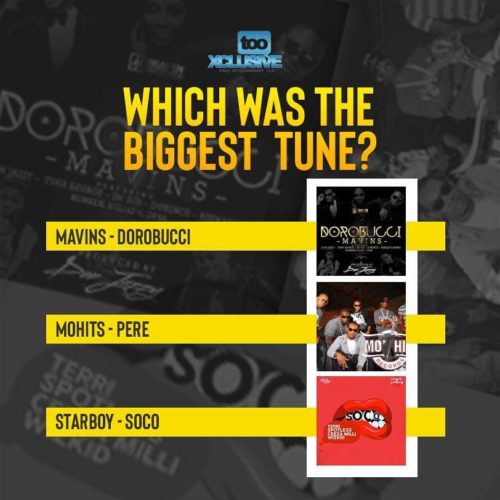 In as much as songs and it’s ownership could majorly be attributed to the artistes of the songs, there are times in which record labels could lay claim to the ownership.

This mostly happens when an artiste or artistes of a certain record label pull resources together to make a song for their record label. This happens quite often in Nigeria when record label artistes make songs for their label. There are some Nigerian record labels who have got their artistes to make them a song to further help the popularity of the label or give them commercial gains. Some of these songs have gone on to be major hits while some have been seen as trash.

However, this publication is focusing on the songs that have become major hits and three Nigerian record label songs have been highlighted below for you all to choose which was the biggest hit.

Mavins – “Doro Bucci” – This record was released in 2014 and just within few days after release it blew up like a provoked wildfire. This record had a combined effort of all the artistes under Don Jazzy’s Mavin, including the Don himself. Tiwa Savage, Korede Bello, Dija, Reekado Banks, Don Jazzy, Dr. Sid & D’Prince all contributed to the song which turned out to be a massive hit.

Starboy “Soco” – This record was one of the biggest records of 2018 and it dominated all through the year. Northboi with his magic fingers made the song even a more infectious tune, giving the production a great touch . Wizkid, Spotless, Starboy Terri, and Ceeza Milli.

It’s a party jam that followed the Shaku-shaku trend. And it was was smash hit indeed.

It was one record that brought the consciousness to record labels that once in a while, they should be looking to make a song for themselves, to prove the talents they have in stall and also help spread their commercial popularity.

With the songs highlighte below, we would love to know which of the record label songs you think was the hottest. Is it Mavins’, Starboy’s or Mo’hits’?

Nifemi is a graduate of the University of Lagos. He's a unique user of the pen when it comes to the expression of whatever. He is editor-in-chief of the organization and also a writer of news, articles, editorials and a lot more to help expand the level of knowledge of the readers and simultaneously have them entertained. A lover of music and football is who he is and a Man Utd die-hard.
Submit your comment
19 total pingbacks on this post
Popular Posts