Representatives of Naira Marley have issued a statement urging the singer’s fans to be calm as he will be out finally from custody tomorrow, 31st of May, 2019.

It would be recalled the singer made his second appearance at the Federal high court in Ikoyi earlier today to witness the court’s verdict on his bail appeal.

He was however granted bail but would have to pay the sum of two million naira as well as meet other bail conditions before he is finally released. He has since then been returned to prison till his bail conditions are met.

This move seem not to satisfy the singer’s fans, casuing their fury as they feel since he has been granted bail, he should be allowed to go home immediately.

Before rash actions are taken, the singer’s representative have now quickly moved to release a statement urging the fans to be calm as Naira would be released tomorrow after his bail conditons are met.

They wrote; “To all Marlians, Naira will be out tomorrow. We just need to perfect his bail. Thanks, management.” 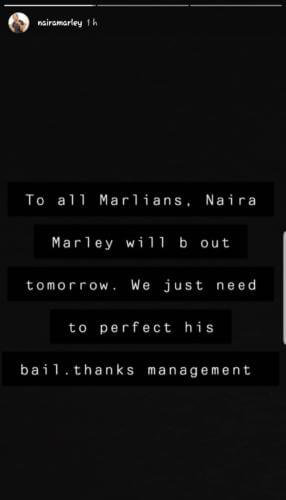 “Naira Marley’s Team Urge Fans To Be Calm As Tensions Rise Over EFCC’s Decision To Remand Him In Custody After Court’s Decision”, 5 out of 5 based on 1 ratings.