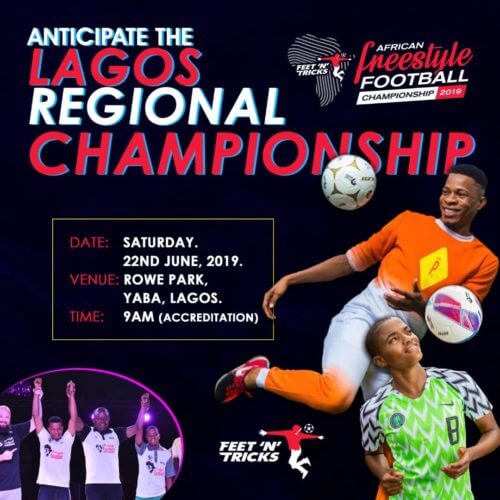 The audition will be hosted by viral street dance sensation ‘Poco Lee’ and will also feature appearances by ‘Raybekah’ and Brainee. The audience will also be treated to various side attractions specially curated by the Feet ‘n’ Tricks team.

The best male and female freestyle footballers at every regional audition will go home with NGN 100,000 each (One Hundred Thousand Naira each) while the second and third place winners will win NGN 75,000 (Seventy Five Thousand Naira) and N50,000 (Fifty Thousand Naira) respectively.

The championship began in 2017 and witnessed major growth in 2018 as it morphed into the African Freestyle Football Championship with the support of major Nigerian brands and a larger discovery and participation of freestyle footballers from across Africa.

Freestyle Football is described by the WFFA as “the art and sport of juggling a football using all parts of the body to entertain audiences and outperform opponents; a fusion of tricks with a ball, dance and music.”

Registration for this year’s tournament is currently open to both male and female freestylers of African descent who wish to attend, and can be done via the body’s website www.feetandtricks.com.

The Nigerian contestants will be shortlisted through four (4) Regional Championships that will be hosted in Abuja, Warri, Owerri and Abuja in June and July this year, at the following venues and dates – at Rowe Park Yaba, Lagos on June 22; Brownhill Event Centre, Warri, on June 30th; Cubana Lounge, Owerri on July 6thand at the Central Park, Abuja on July 13th.

The shortlisted participants who emerge from the qualifying rounds will contest at the finals which will hold on September 14th and 15th, 2019, at the Balmoral Convention Centre, Federal Palace Hotel in Lagos.

Chairman of Feet ‘n’ Tricks International, Mr. Valentine Ozigbo, who spoke ahead of the event, said, “We are pleased about making progress in sustaining the drive to pave a new direction for freestyle football in Africa. We are also scouring the grassroots to discover potential talent. So far, we have been to National Stadium, various points in Yaba, Ajegunle, Obalende and Okokomaiko and will still visit other grassroot points across Nigeria. Freestyle Football has so many developmental potentials which include job creation and recreation. ‘We will work on the continuous development of African freestyle talent and continually exploit all available resources to create more awareness for the sport.’ he added.

The Championship this year will be covered live by Startimes in 30 countries in Africa where they are present and also on their digital channels. There will also be a host of other media partners at the events.

Freestyle football is one of the fastest growing aspects of the soccer game worldwide.