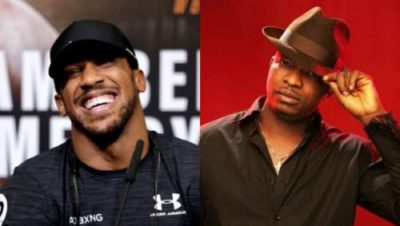 Nigerian-born British legend, Anthony Oluwafemi Olaseni Joshua, OBE is a British professional boxer. He is currently a unified heavyweight world champion, and holds three of the four major world championships in the sport. Anthony Joshua shared a video of himself singing Paul Play’s Moshorire song. The boxing champ was vibing to the song as he was chilling and eating fried plantain (dodo) alongside the classic video of Moshorire. Watch below

I FEEL ON TOP ON OF THE WORLD RIGHT CUZ THE WORLD HEAVYWEIGHT CHAMPION IS FEELING MY VIBE BIG UP ANTHONY JOSHUA!!! #anthony_joshua #WACKLESS #tundeednut #lighthousefamily #instablognaija#ajbxng

Veteran musician, Paul Play was moved and amazed when he got the video shared by Heavyweight  champion Anthony Joshua and he decided to hit the studio to record a new version and dedicate it the British boxer.

Check it out below

Right back at ya Tony!!!