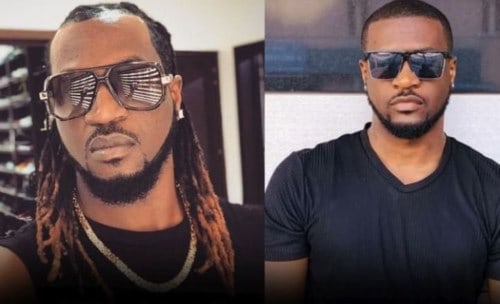 The duo who were members of the defunct group, Psquare finally put an end to their 5-year-old beef today. Netizens got the first glimpse of reconciliation after Peter Okoye visited his niece and nephews in Atlanta four days ago.

Recall, Psquare disbanded in 2017 after a disagreement about the role of their manager and brother, Jude Okoye. There were also rumours that the brothers went their separate ways because of their wives, Anita and Lola Okoye.

As killjoys are yet to prove the above mentioned, Rudeboy and Mr P shared a clip of them squashing their beef in the presence of their family and friends. It is yet to be determined when they actually made peace, but we suspect it happened last week after they followed each other on Instagram.

Ladipoe’s Providence Project Is A Scintillating Taste of HipHop’s Re-Awakening In Afrobeats.

The newly reconciled brothers, Paul and Peter Okoye have set tongues wagging after they asked fans to send money to...

Ladipoe’s Providence Project Is A Scintillating Taste of HipHop’s Re-Awakening In Afrobeats.