Rema Goes Wild On Twitter, Calls Out People Who Are Jealous Of His Success & Fame

Sensational Mavin act, Rema has surprised fans after he ranted about how some undisclosed persons are jealous of his success.

The “Woman” singer took to his Twitter page to rant about some people that are hating on him because of his success. According to him, these undisclosed persons are pissed because they feel like he had it easy especially because he is very young. Rema said that they attribute his success to his label deal but forget that one must have a hustling spirit to survive.

He also stated that he made it to the top with beats other artists rejected and that he is hated because of that. The singer thanked Obama for believing in his song, “Iron Man” bragging that most artistes won’t have been able to achieve half the thing he did on that beat.

Speaking on his late brother, Rema said only two friends were present at his brother’s death, and this experience caused him not to be comfortable around people because they love him only because he has something to offer. Rema ended his rant calling out his management for trying to change his password and also to urge new generation artistes to never let anyone make them fight against each other.

In his words: “Niggas don’t wanna see a kid win, they feel I got it too easy. I shower with my sweat, we go off on this side like the days in BENIN it got nun to do with my deal, come and sign these papers without a hustler spirit, you gone lose! Management gone change my password now lol Skull. I climbed this cliff with bunch of rejected beats. Some niggas hate me because of that.

When we in the same room together don’t label me proud or rude because I don’t smile, talk or laugh to your jokes.I protect my spirit and my flesh, whatever scar I die with my reborn shall possess. Thank you OBAMA for seeing what I saw in Ironman, lot of niggas couldn’t. I was 18 when I made that song, the beat got 6 sounds. I’ll give that simple beat to half the game and I won’t get a record as strong as IRONMAN.

Niggas feel I’m disrespectful, they want me to alert them before I drop.I done made millions before this fame, let no man feel this money changing me.I told D’prince sir I’m making money where I’m at I think I’m good. D’prince said to me stop what you’re doing and come to me boy “you’re the chosen one”, this music shit is gonna pay if you trust me! I done did Melodies that never existed in this world, go listen to my records. I swear them engineers thought I was crazy when I say turn off the auto tune.

To the girl who rejected me before this fame, I’m eating the royalties off this pain. (WHY).Ozedikus took risks for me, he was under a management with guidelines. He sneaked beats to me so I could record when my first engineer left me because we couldn’t pay him at the time. All the beats Ozedikus sneaked are now HITS.

When my late brother did house parties y’all came, when he died only 2 friends stood beside his death bed. That’s why I’m not comfortable around people, they love me because I have something to offer, You know yourselves don’t let me catch you!!!Dear new generation artists, let’s be friends genuinely, don’t let this people forcefully make us friends just to prove healthy competition and make us enemies for their own entertainment. I swear I love y’all. Stop trying to change my password!!! 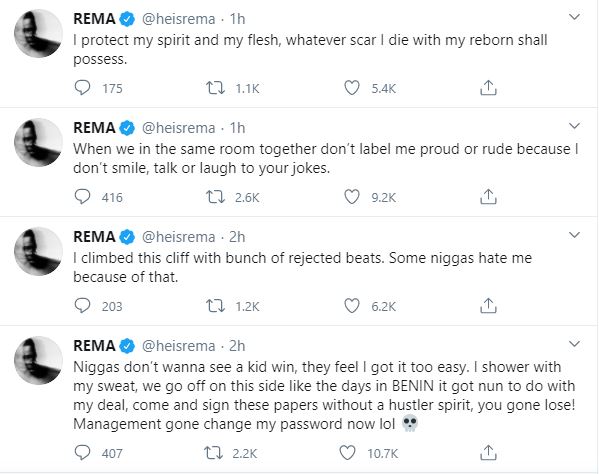 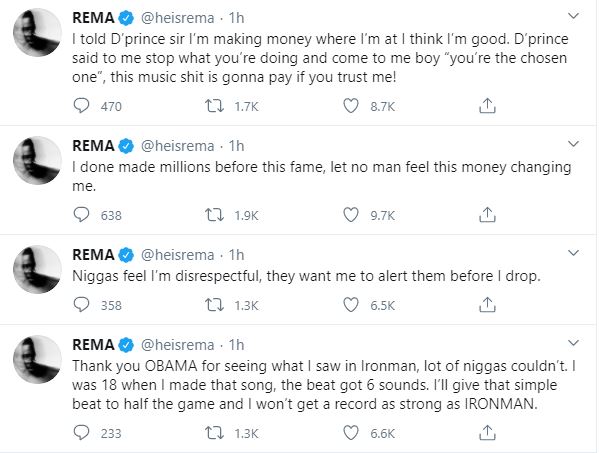 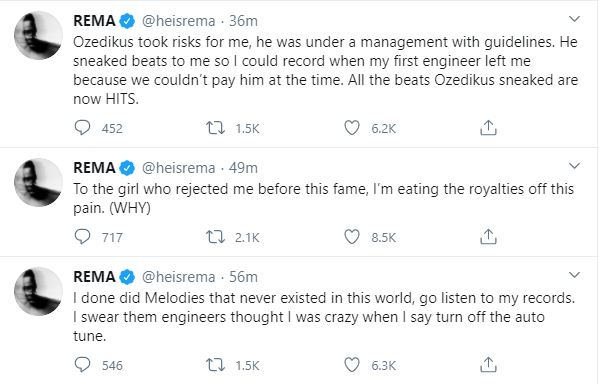 “Rema Goes Wild On Twitter, Calls Out People Who Are Jealous Of His Success & Fame”, 5 out of 5 based on 34 ratings.