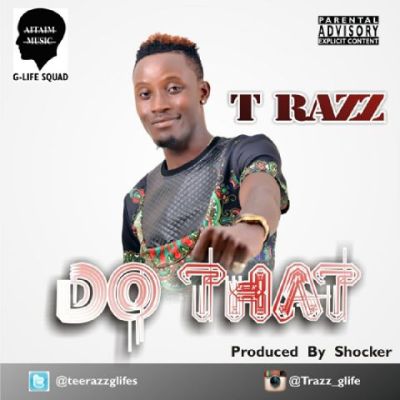 TOBILOBA SALAMI aka T RAZZ is a Nigerian Fast Rising Musical Artiste with a distinct and unique musical ability.
TOBILOBA SALAMI aka T RAZZ hails from Ijebu- Ode in OGUN – STATE, NIGERIA. His distinctive blend of Hip Pop, Afro Pop, Highlife, and Traditional African Musical influences creates a vibe that is contemporary and universal while maintaining a clear African identity.
“DO THAT” is the Official Single/ Solo debut of T RAZZ. DO THAT is Produced by Shocker and the video was directed by the Young Sought After Video Director, Unlimited LA. The Video and Audio of the song is currently enjoying massive air play on various Television and Radio stations in Nigeria and it is also on major internet blogs all over the globe.