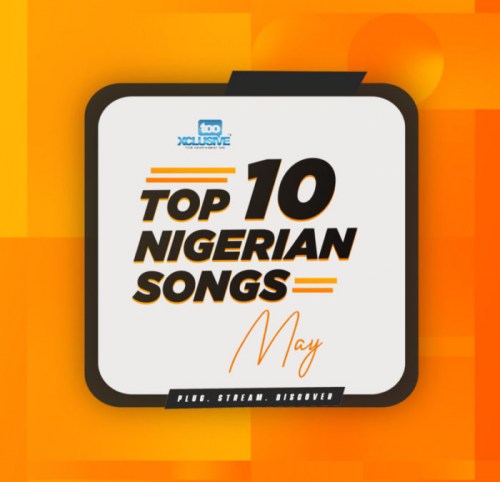 It’s the end of the month, May, and artistes have continued to dish out new music. In a bid to keep you up to date about the hottest Nigerian songs, we have compiled a list of Top 10 songs that’s disturbing major music charts and speakers.

From cools songs about gingering your woman and finding peace of mind to party bangers, we’ve got you covered. Get the Hottest music Sauce below!

From the Hottest to the Hot (Top to the bottom), See the Top 10 Nigerian Songs Of The Month, MAY.

Blaqbonez is joined by alté queen, Amaarae and Burna Boy signee, Buju, on the single, ‘Bling’. The video was directed by frequent Blaqbonez collaborator, TG Omori, who also directed videos for the singles, ‘Mamiwota’ and ‘Haba.’ Amaarae and Buju come along for the ride and used sa gaming, delivering verse-of-the-year contenders and matching the song’s mellowed-out energy.

“Feeling” presents a sonic reprieve from our problems as Ladipoe raps about the need to find happiness even in the face of challenges. Life is short and the pursuit of happiness is what keeps us going. Here, Ladipoe and Buju says we should take a break, throw our hands in the air and let go.

“Feeling” is a song about gratitude. It is a tune serenading the importance of tuning the bad thoughts off and projecting positivity.

Bounce is the new fans’ favourite track off Ruger’s body of work – RUGER EP, it a groovy Afro-reggae/dancehall tune produced by Kukbeatz.

The energy-filled visuals for “Bounce” find Ruger in his element showing his boyish charms while bringing the song’s sensual message to life. We see shots of Ruger and his muse, played by brand influencer and director Naomi Offor, as the pair share intimate and cosy moments in a range of locations. As night falls, Ruger throws a party to celebrate his love and their union. However, at the party, things take a turn for the worse when his muse is physically harassed by another male guest. This causes Ruger to spring into action and defend his woman, He knocks out the male guest and locks him in a chill freezer.

Rock, produced by Eskeez is Olamide first single for the year 2021 and the lead single for his forthcoming album ‘UY Scuti’.

5. “Somebody Baby” by Peruzzi x Davido

Off the A Better Time album is another Davido hit song, “La La” which features “C-Kay”. The track is A blend of Afro-Pop and Amapiano that samples, “Makossa”. It’s quite an effort / music experiment from Davido.

Kilometre is the first song from Burna Boy since emerging as a Grammy winner. The record a perfect beat for a classic banger produced by Chopstix.

“It Is What It Is” produced by Kali and Blaise Beatz is another impressive music experimentation from Adekunle Gold and his debut 2021 single. He combines Urban highlife and Afrobeat with the Bop and Dancehall genre.

He talked about avoiding Worries and disappointments, Prioritizing Peace of Mind. Enjoy!

Off Teni’s Wondaland album is another banger – ‘Injure Me’. This Ridimakulayor, Mr Pheelz produced song is fans’ new favourite track, And it’s on May Top 10 songs of the month. Enjoy!!!

“MEX FLAIRZ” is the producer of this next song titled “Show Me” which happens to be a track from Joeboy’s “Somewhere Between Beauty & Magic” album. It’s an Afro-Pop record with dancing vibes. Something you can jam back to back. A high energy track with great production in sound and mix.

M.I Abaga Calls On Other Nigerian Tribes To Stand With The Igbos

November was indeed a beautiful month, and we can all agree that although it had a bit of a hiccup,...