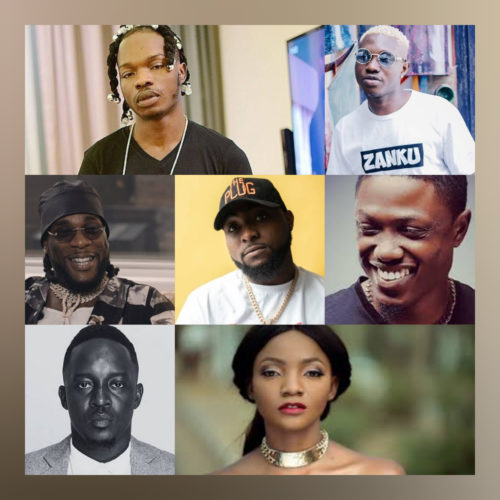 A lot happened! ‘Fights’ among music artistes, war-of-words between artistes and the fans, battles between Nigerian music artistes and Nigerian law enforcement agencies and a whole lot of others. However, because we are putting the year 2019 in retrospect, we have decided to put heads together and identify our top 5 most controversial moments of the past 12 months and have y’all reminisce. In order to make it even more interesting, you have an opportunity to make your won list and drop below if you do not agree. Peep list below.

Naira Marley/Zlatan Vs EFCC: This definitely would be one of the greatest controversial events to have hit the Nigerian music industry,  and it all started when officers of the Economic & Financial Crimes Commission (EFCC) stormed the resident of Zlatan and Naira Marley on the day the latter clocked the age of 25. They were picked up and detained in connection with cyber crime for several days before Zlatan was released. The case continued with Naira Marley who was eventually charged to court by the anti-graft agency and got held for several weeks before he got a bail hearing granted by the high court. The case is still currently in court with the next hearing set for the first month in 2020.

MI Abaga Vs Vector: These two have a long  history of rivalry that has never been anonymous to fans and every Nigerian music industry participant. However, it is in the year 2019 that everyone felt the effect of their disagreement. Their beef finally birthed a long-anticipated diss-track that shook the whole music industry. This issue trended heavily during those times everyday on social media with their fans also playing their parts, throwing shots at one another at every opportunity they get. From the “Martell Cypher 2”  to “The Purge” to “The Viper” to “Judas The Rat,” the whole industry was treated to some really entertaining Hip-Hop bragging right games. It’s a worthy number 2.

Burna Boy-Coachella Saga: This issue started harmlessly from Burna’s end after the organizers of Coachella 2019 released their line-up for Coachella 2019. Burna got upset with the fact that his name was written in small fonts while there are some other artistes on the same list that had their names written in bigger fonts. He claimed that he is an African Giant and therefore he wouldn’t accept his name written with small fonts. This lamentation by Burna instead of being reacted to by the organizers of Coachella, was taking up by Nigerians who slammed Burna for not being grateful to be called to such a prestigious music event. He was termed arrogant and dragged to the mud on social media. Burna Boy as someone that never ceases to fight back when need be, took to his Instagram Story to respond, posting a statement that seemed like he was calling Nigerians backward un-progressive fools. He wrote; “‘Don’t worry, I know for a fact that my own country, NIGERIA is home to the largest number of backward Unprogressive FOOLS.I will still fight for them because they are not mentally advanced enough to fight for themselves. They will Forever have my Genuine undying LOVE. To the few proud Young AFRICAN Intellectuals who will not conform to whatever bullshit they are given. you are the Only Hope of AFRICA. God bless you all.”

Davido & Pregnancy Saga: This one came in the last quarter of the year but it came in really massively. The effect was really loud and every person in the Nigerian music terrain had a piece of it. It happened as two girls got on the internet to claim Davido got one of them pregnant with the analysis of how the whole fiction happened. This stunt by these girls led to Davido getting them arrested and promising to send them to jail with everything he has. However, after so many pleas from fans and close associates, the singer decided to tamper justice with mercy and get them freed. This happened shortly after the birth of Davido’s first son and prior to the release of his 2019 second single; Risky.”

Naira Marley Vs Simi: Simi in April 2019 via an Instagram Live video declared that internet fraudsters popularly known as Yahoo boys should stop buying her songs as the money they make is not from a legitimate means. This sparked an outrage from many music fans as they believed she was in no right to have said that, judging by the fact that while she was an up & coming artiste, it is those yahoo boys she condemned that bought her songs. This also led-in Naira Marley to making a comment about the issue, trolling Simi for speaking fiercely against yahoo boys. This issue continued to that level that Naira Marley had to come out again saying Simi saw her at an event in Lagos but ignored her due to the whole yahoo boys-saga. This same issue still led to Simi discussing Naira Marley at an interview, throwing a light shade at him.