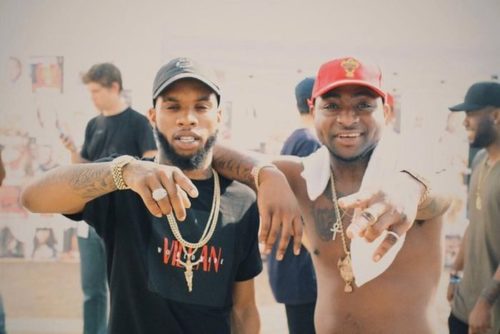 These are definitely good times for Davido as all seems to be falling in the right place for him. The superstar singer is currently on a radio tour in America following the exploits that his 2017 smash hit single, “Fall,” is currently doing on the US Radio and the billboard.

Aside the sudden acceptance of “Fall” in the United States, the artistes over there seem to want to have a touch of the superstar’s uniqueness on their projects. After featuring on Quavo and Hoodie Tha Boogie’s Albums last year, Canadian rapper, song-writer and singer, Tory Lanez, has just asked Davido for a joint mix tape.

Davido shared the news on his Insta story in the early hours of this morning. In the chat it could be seen vividly that Tory Lanez has been requesting for a while now from Davido for them to have a mix tape together as he asked the African superstar if he is now ready for them to get to work.

In the chat, Davido texted Tory “Sup bro, It’s Davido,” Tory Lanez then replied with some sort of excitement, “DAVIDOOOOO, So we doing this joint mixtape or what ?” Davido in some ready-to-go mood responded, “Duuhhhh????? I’m ready, Lemme know when i can pull up for like two days”

And with the last words on the chat screen, Tory Lanez got back, “I’m in Miami wya.”

So we guess some really good banging mixtape is in the bag from Davido and Tory, we definitely can’t wait.

It’s some really good news for African music that the international guys now reach out to our artistes for a major project and we hope this never stops.