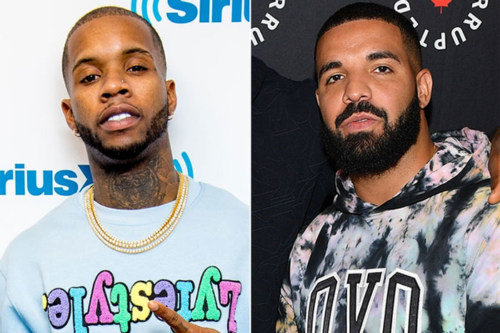 Tory Lanez spotted someone who looks just like a Drake at a club and shared it on his Instagram story, over the weekend.

The rapper also caught Lil Wayne on Camera and took to Instagram to joke, Wayne and Drake in one spot! What a night.

Later in the night, he noticed the Drake doppelganger leaving the club and filmed him again. Why he wearing a jacket. He goes ur fake Drake, he wrote.

Sometimes last month, Lanez and Drake both linked up on the basketball court. The 2 Canadian rappers went back and forth on social media to troll each other afterward.

Drake joked, I smoked these guys yesterday. @torylanez got all buckets on his head top and a game winner and @k_showtime you can come to embassy and get dog walked too just don’t bring the deezed yout cause he bails you out.

I made the first bucket of this game… AND CUZ SAID ‘Let’s do this tomorrow’,” Tory shot back.