Trouble!!! I Will Ask People To Beat You Up Mercilessly – Hushpuppi Threatens Timaya As The Singer Firesback || Watch 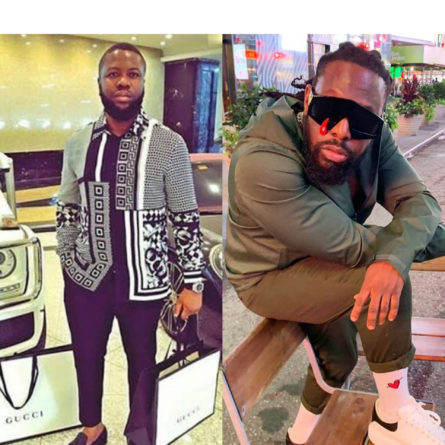 Hushpuppi has lambasted Timaya for calling out his industy colleagues for wearing fake designers.

Y’all would recall we brought you news a couple of days ago about Timaya throwing shades at his industry colleagues for wearing fake designers and patronizing local tailors. Well, it seems that got Instagram celebrity and popular socialite, Hushpuppi, a little upset as he fired back at Egberi Papa on behalf of those he called out.

Hushpuppi said Timaya is in no position to call out anyone as the “I can’t kill myself’ singer alongside Olamide and Phyno made a song to diss him for doing the same three years ago. The Billionaire Gucci Master took to his Instagram Story to fire the shot.

The issue however didn’t stop there as Timaya also didn’t relent, responding to Huspuppi via Instagram. He said he doesn’t have anything to say to him because he is on exile. He said if Hushpuppi really wants to have a talk with him, he should leave Dubai where he is and come back to Nigeria.

Fake Outfit: “Shut up your mouth,” Hushpuppi throws Timaya under the bus for attacking his fellow celebrities, 3yrs after making a song to diss him. [Swipe]

“We don’t talk to people on exile,” Timaya fires back at Hushpuppi. [Swipe]

“God saved you for dropping the topic. Even Davido, Wizkid and Dbanj who dress well don’t make noise like you,” Hushpuppi replies Timaya. [Swipe]

“Trouble!!! I Will Ask People To Beat You Up Mercilessly – Hushpuppi Threatens Timaya As The Singer Firesback || Watch”, 2 out of 5 based on 3 ratings.