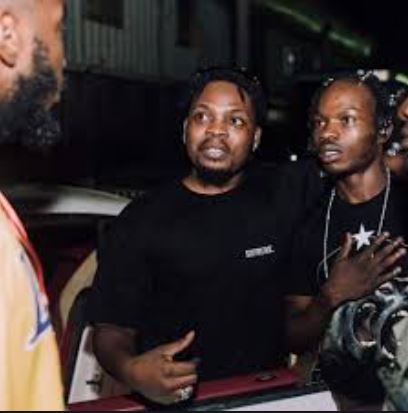 Popular UK Online Radio Station, No Signal has caused chaos on Twitter following the announcement of a battle of hits between Naira Marley and Olamide.

No Signal a couple of months ago held a battle of hits between artsites and Wizkid and Vybe Kartel and Wizkid won. However, in a recent announcement, Naira Marley and Olamide as to battle it out. This arrangement did not go down well with music lovers who felt it was disrespectful to Olamide as he has been in the in Industry longer than Naira Marley.

Different impacts, legends in their own rights. @Olamide v @officialnairam1

You saw NS10vs10 olamide vs Naira marley you say its disrespect to olamide..

“Twitter Reacts As Naira Marley & Olamide Set To Engage In Battle Of Hits”, 4 out of 5 based on 6 ratings.

Olaosebikan Olabimpe is a News Writer and Content Creator at Tooxclusive. Her idea of a great day is to be indoors snuggled up with a book and good music. She is also a passionate lover of rap.
Website
Submit your comment
6 total pingbacks on this post
Click here