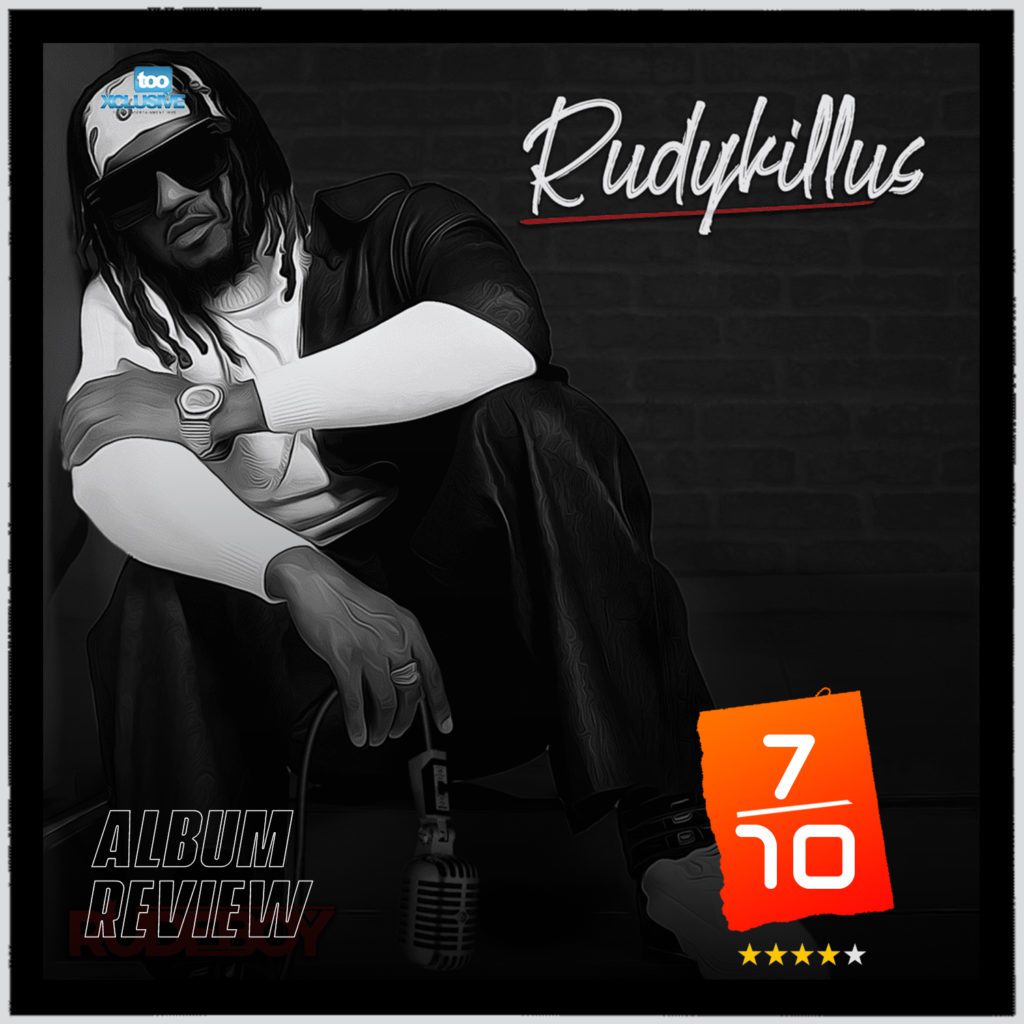 Album – “Rudykillus”, Track – 15, On his solo debut, Rudeboy (one half of P-square) adds a fresh vibe to the timeless sounds that underpinned the group’s hit-laden discography.

RudyKillUs Album by Rudeboy is a nostalgic recommendation for fans of the defunct supergroup “PSquare”. The duo of Peter and Paul “P-Square” had since gone their separate ways since the September of 2017; and as a result, fans who are caught in the bittersweet dilemma have anticipated and waited a long time for the release of Rudy’s solo album. Surprisedly, Rudeboy who has in subsequent years after the breakup from PSquare released singles “Audio Money” and “Reason With Me” (two singles that did quite well in the Nigeria Charts) gave fans a treat on August 5, 2021, when he dropped his debut album “Rudykillus“.

The album has 12 songs and 3 bonus tracks making it a total of 15 records, no features and no super-producer on the production lineup. STREAM HERE

Rudeboy’s idea of bringing back the old P-Square template into making this RudyKillUs album is great, as real hard-core fans of P-Square can get that old vibe they love and miss (except for the fact that the only Rudeboy runs the show now).

Okay with no further delay; let’s break the tracks down.

The album started with a song called “Nowhere To Go” produced by Chrisstringz. The record is a Reggae and R&B fusion about love and heartbreak. If you really are into PSquare, you will love this song.

“Ayoyo” is a feel-good record with African Rhythm and percussion (notably South African elements). It’s another love song produced by Chrisstringz and it really gives you a perspective of what’s to come as the album progresses.

“Focus” is another song produced by Chrisstringz; a Pop and Reggae fusion that’s about smoking; not getting into drama (wahala); and taking care of business. The sound is amazingly one of the best so far. Hopefully, more will come along the line.

“Ego Nkewu” is a highlife record produced by Sele B and it’s quite a turn from the production of previous records on the album. Mostly sung in the Igbo dialect yet one can’t help but enjoy the rhythm of the baseline and percussion ensemble throbbing from the speakers. I think a Flavour feature would have made it even more fantastic.

“Fall In Love” is strictly a Reggae record and it’s produced by Chrisstringz. The song has Rudeboy reflect on his satisfaction of love and joy in his partner. The song is a Calypso love treat for lovers with hearts to melt and a reason to sing along.

“Broke Land” is much more like a story of Rudeboy’s humble days when he wasn’t a celebrity and the ladies wouldn’t care less who he was. In a nutshell, it’s about getting money which is a catalyst for being called honey. The record is produced by Chrisstringz and the production is mild and mellow with a cool vibe with lyrics like; ‘Money must be made ooo/ nobody be your mate oo/ go ask Bill Gate oo. I guess you get the gist‘.

“Something Must Kill A Man” is a Reggae/Dancehall record about a rendezvous experience probably in a club with a pretty stripper who only wants to get down with the big shots( something along that line). So, something must kill a man (talk about temptation). It is produced by Chrisstringz who has the major production credit on the album.

“Ihe Neme” is a Reggae record similar to “Fall In Love” in production style but the difference is the Igbo dialect embedded in the lyrics and the sensational outcry of victory against adversaries. Rudeboy sang from his heart and gave spoke a piece of his mind. And so you know, it’s another Chrisstringz production.

“Catch Your Fever” is a Afrobeat/Pop record produced by “Orbeat“. Something very different in sound from what’s been going on in the album, although with the same talk about love and relationship goals. It samples a Femi Kuti rendition which can be heard at the beginning of the record.

“4 Days” is a very typical PSquare record (with a Dancehall/R&B fusion) produced by Chrisstringz. The lyrics of this song is somewhat explicit considering who is listening. Well the song is rightly placed on the tracklisting and it samples one of the old PSquare songs ( which was also used on the bonus track “Woman”)

“Hey Mama” is a Dancehall record that sounds much more like a Patoranking song (except that Patoranking is not on the song). The song is not bad at all when you think of how many people might mistake Rudeboy for a Patoranking. Well, it’s one of the numbers on the album( luckily it’s at the bottom of the list)

“No Gimme Space” is the last song on the album(minus the bonus records). On this album, there are only 3 songs Chrisstringz didn’t produce and this is one of them. The song is produced by Lordsky and it’s the last song off the album “Rudykillus”.

The production is a Dancehall record but nothing much about it. It serves right where it’s placed on the album

Track 13
“Woman” is a love song about love, the perfect woman and a ride and die Queen. Well, this song was a single and it’s been out for a while now. It’s a Dancehall/Pop record that has a lot of strings movements and sessions.

Track 14
“Audio Money” is about that fake lifestyle on social media. It’s one of the singles Rudeboy released after this break-up from PSQUARE. It’s a notable one that has gone up charts and made radio playlists around the country.

Track 15
“Reason With Me” is one song that has made and top charts and playlist since its release. It’s actually the first single Rudeboy dropped after the breakup from PSQUARE. It’s a good song that you probably have heard and know.

This album is one of the most anticipated albums since 2017 and finally, we got it.. many of the songs on this album would have brought out a different taste in sound if there were features on them. Likewise, the production lineup doesn’t project the caliber of artiste Rudeboy. So looking at these facts we see that it’s either Rudeboy’s idea of Deja Vu didn’t go as planned, the misses are in the production or there’s a lack of inspiration. Either way, the album didn’t meet up to expectations (although there are some good moments and records on it). The notable songs are the bonus tracks and a few of the first records.

But fans of the defunct P-Square will enjoy this beautiful work of art because art is art and opinion doesn’t matter much.

Listen to the album with an open mind and you will definitely find a record you like, STREAM HERE.

Note: the criticism on this review is only deduced on the premise of the height and caliber the artiste has attained in his career and subsequent projects.

This album is Rated 7

Album Review Of RudyKillUs body of work, delivered by Rudeboy Is Written by; Olalekan Okeremilekun @imjudah1