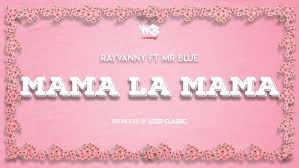 Talented Tanzanian songster and also the WCB frontier, Rayvanny unleashed the visual to his hot sensational track tagged “Mama La Mama”, where he has teamed up with another Talented Tanzanian hitmaker, Mr. Blue.

This new input serves as track-4 which was lifted off his much anticipated Project, “Flowers EP“. It was engineered by Lizer Classic. Not too long, just after a few days, Rayvanny bounced back to thrill his fans with the highly awaited visuals of the impressive song, “Mama La Mama” whose video has also already been released for the fans to enjoy and also to enhance the fast promotion and so far received much love. The visuals were shot and directed by Director Kenny.