What Do You Think Happened To Davido In This Video? Watch 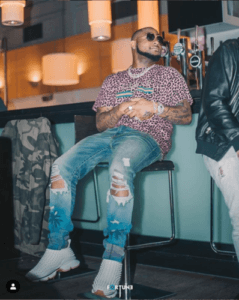 Davido and Chris Brown partied together in Washington on Monday morning after their performance at Breezy’s on-going Indigoat Tour.

However, while partying, a camera went to the face of Davido who was beside Chris Brown and his state at that time was shocking. Davido who is widely known as a lover of fun and one who loves to always make an appearance at the club was looking all lost. Internet folks who saw the video have begun to predict what could have happened to the the OBO to have his mood all damp.

Some have said it could be because he is a married man now and doesn’t want to exercise any sign of indiscipline while others feel it could just be that awkward mood anyone could be in. Watched the video below and give your thought on what could have happened with the OBO.

You see, that’s how a married man should behave in the club. Nice one Davido.